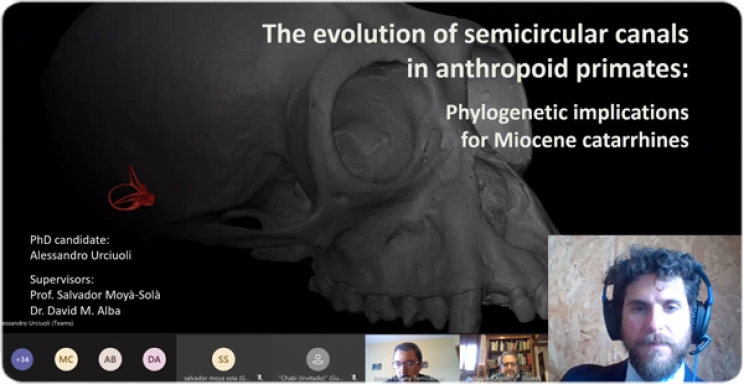 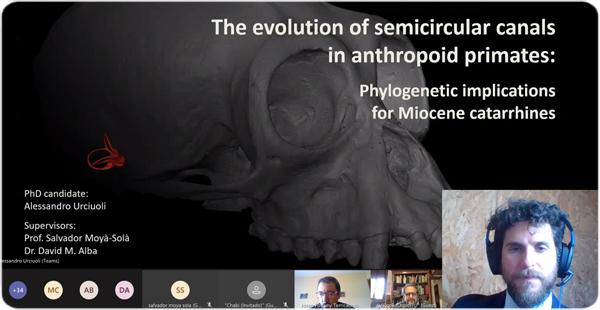 Alessandro Urciuoli, researcher at the Paleoprimatology and Paleoanthropology Research Group of the Institut Català de Paleontologia Miquel Crusafont (ICP), defended his doctoral thesis on the usefulness of the semicircular canals morphology in the inner ear as a tool to establish phylogenetic relationships between catarrhine primates. His work has been supervised by Salvador Moyà-Solà and David M. Alba (ICP).

The court has awarded the work "The Evolution of Semicircular Canals in Anthropoid Primates: Phylogenetic Implications for Miocene Catarhines" with the highest score and granted Urciuoli with the PhD degree in Biodiversity. Due to the current pandemic circumstances, the defense has been carried out in a blended way at the Universitat Autònoma de Barcelona (UAB). 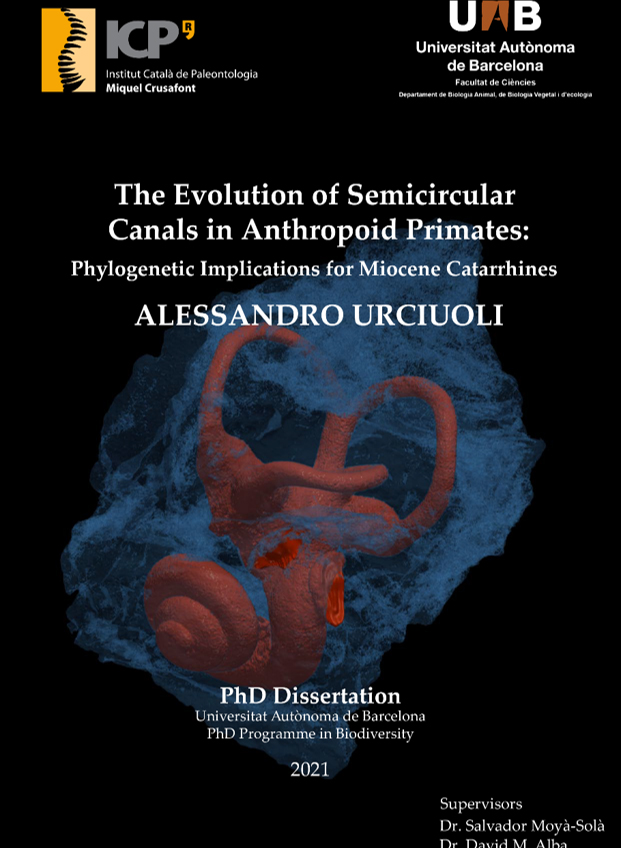 Summary of the doctoral thesis:

Catarrhine primates originated in Africa by the Oligocene. Besides cercopithecoids and hominoids they include several lineages from the Miocene of Africa and Eurasia. Their phylogenetic relationships are controversial due to their incomplete fossil record, abundant homoplasy, and mosaic evolution. The identification of anatomical areas not very prone to homoplasy, such as the inner ear semicircular canals (SCs), is crucial for inferring the phylogeny of extinct catarrhines. The present dissertation explores the utility of SCs for phylogenetic inference among anthropoids, and particularly Miocene catarrhines.

The results are provided in three published articles, which are subsequently discussed in relation to the literature and prospects for the future. The first article analyzes patterns of SC shape variation in extant catarrhines and tests its utility for making phylogenetic inferences in extinct hominoids. The remaining two articles test alternative phylogenetic hypotheses in the pliopithecoid Epipliopithecus and the dryopithecines Hispanopithecus and Rudapithecus.

More in this category: « New macaque fossil remains from Morocco
back to top