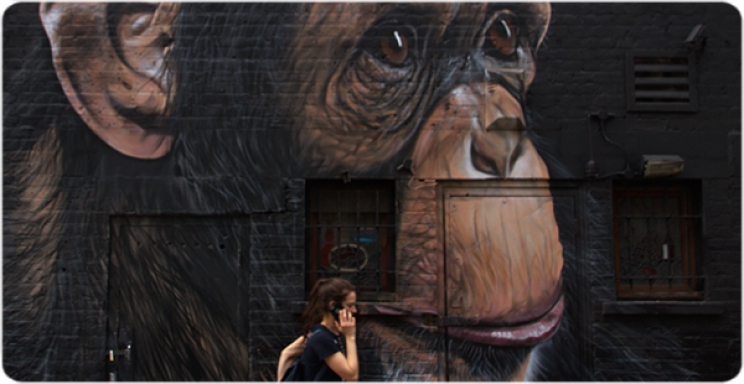 A PNAS study led by the Institut Català de Paleontologia Miquel Crusafont (ICP) analyzed the kinship between two Miocene great apes (Hispanopithecus and Rudapithecus) based on the morphology of their inner ear semicircular canals. This anatomical structure has revealed to be very informative in reconstructing phylogenetic relationships between fossil primate species. The results are in accordance with the distinction of these taxa at a generic level and reinforce their allocation in the Hominidae. Furthermore, the similarities in semicircular canal morphology with extant chimpanzees and bonobos suggest that the latter possibly retained the ancestral condition, while orangutans appear to have derived independently.

Living hominoids are a group of primates that includes the small-bodied apes (gibbons and siamangs) and the larger-body great apes (orangutans, gorillas, chimpanzees, and bonobos), which, along with humans and their extant relatives, belong to the hominid family. Hominids, in turn, are divided in two subfamilies: the pongines (the orangutan lineage) and the hominines (the lineage of the great African apes and humans). Unraveling kinship relationships between living and extinc species that make up the tree of human evolution is one of the great challenges in paleoanthropology. Miocene great apes play a key role in this puzzle and are crucial for reconstructing the ancestral moprhology from which the first bipedal homininis evolved.

A new study directed by the Institut Català de Paleontologia Miquel Crusafont (ICP) sheds futher light on the relations of kinship between two fossil  great apes, the driopithecines Hispanopithecus laietanus and Rudapithecus hungaricus. Both lived during the late Miocene, about 10 million years ago. Despite that they coexisted over time, their representatives probably did not inhabit the same areas: while Hispanopithecus lived in present-day Catalonia (remains have been found in different sites in the Vallès-Penedès basin and the Pre-Pyrenees), Rudapithecus inhabited in present-day Hungary. Although there is a consensus among the scientific community that two taxa are closely related hominid species, the debate about their phylogenetic relationships with the living members of the great-ape-and-human clade are not settled. Some authors include the driopithecines in the orangutan lineage, while others consider them as ancestral hominines or as basal hominids preceding the divergence of both groups. 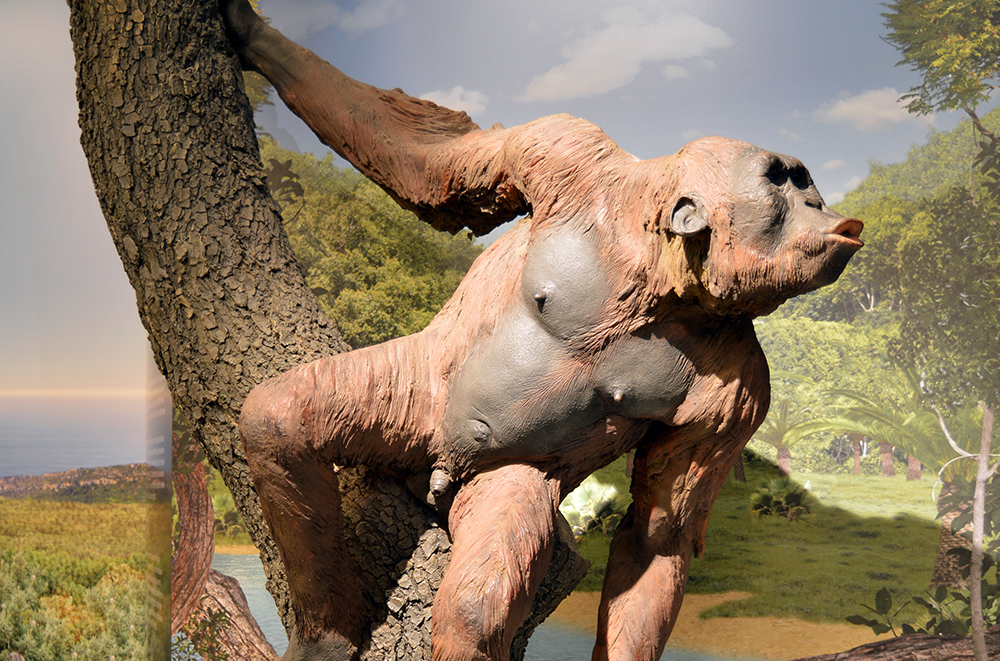 The article published in the Proceedings of the National Academy of Sciences (PNAS) led by Alessandro Urciuoli (ICP) addresses the relationship between these two species from an innovative perspective, that is, by comparing their inner ear semicircular canal morphology. Indeed, the mosaic nature of hominid evolution and the presence of anatomical characteristics evolved independently in response to selective pressures related with function, complicate our understanding of the evolutionary relationships between fossil and living species. However, previous studies conducted by ICP researchers have shown that changes in the morphology of the bony labyrinth in the inner ear could be used a proxy for inferring the phylogenetic relationships of hominoids. Furthermore, this structure (located in the cranium, inside temporal bone ) is fairly common in the fossil record due to its strong mineralization. 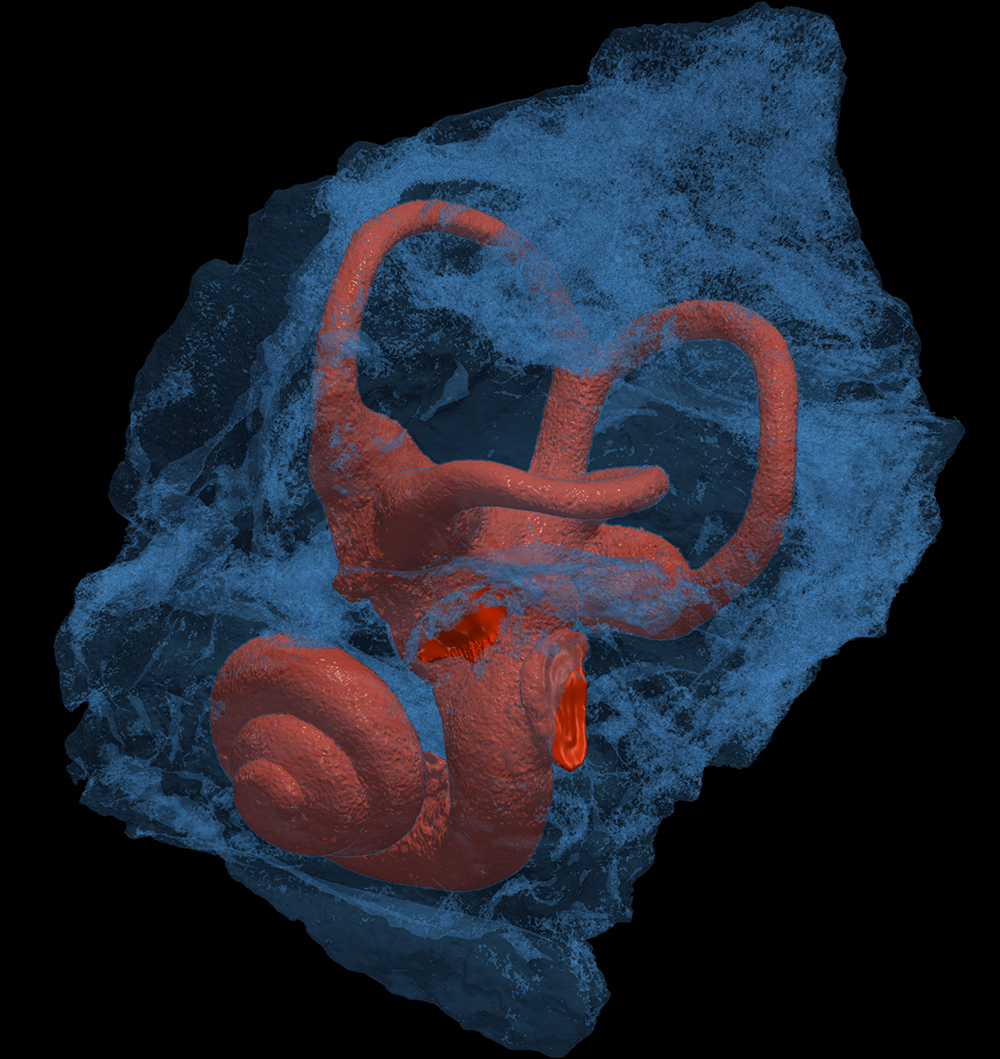 The differences in the morphology of these structures were inspected using a recently developed geometric morphometric approach, performed on three-dimensional models of the semicircular canals obtained from high-resolution computed tomography of the fossil remains. This new technique consists of analyzing the deformation between continuous surfaces and thus quantifying the differences in shape between individuals and species. The results confirm that both Hispanopithecus and Rudapithecus are, indeed, hominids according to their robust canals (a unique character of great apes and humans). Furthermore, the differences found in the morphology of the two dryopithecine species support that they belong to two different genera, which has been a matter of debate in the past.

The study goes one step further and, in a kind of time travel based on the analysis of living and fossil hominoid species, it reconstructs how the semicircular canals of the last common ancestor of hominids would have looked like. In this sense, the study concludes that the semicircular canals of extant chimpanzees and bonobos closely resemble those of the ancestor, while the markedly different morphology of orangutans would have evolved independently from the ancestral form.

Dryopithecines belong to a fossil hominid group that inhabited Europe (and perhaps Asia) during the middle and late Miocene. Both Hispanopithecus and Rudapithecus were large sized (reaching 35-40 kg in males), fed mostly on fruits, and exhibited many features shared with today's great apes, including an orthograde body plan (suitable for locomotor behaviors performed with an erect trunk) and adaptations in the forelimbs and in the hand for below-branch suspension.

Main image "A resume of human evolution" by chriskatsie under license CC BY-NC 2.0

More in this category: « Tell me what you eat and I’ll tell you where you live 250-million-year-old footprints of a large reptile found in the western Alps »
back to top