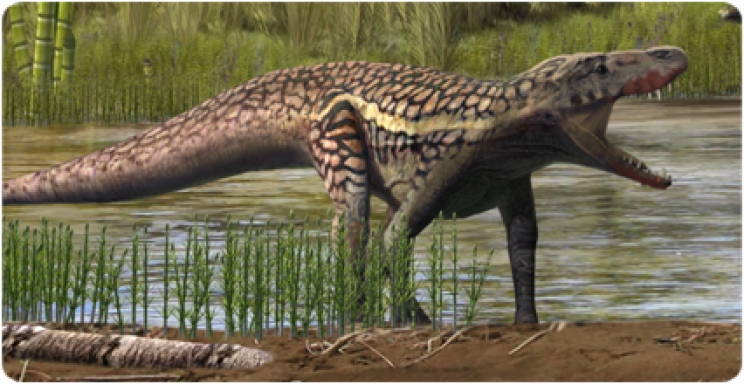 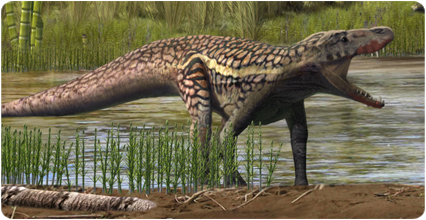 A team of researchers from the Department of Geology at the Universitat Autònoma de Barcelona (UAB) and the Institut Català de Paleontologia Miquel Crusafont (ICP) recently published in PLOS ONE the description of a large set of tracks made by archosauromorphs, reptiles which later evolved into crocodiles and dinosaurs. Among the tracks, there is evidence of a new species, the Prorotodactylus mesaxonichnus, which corresponds to a reptile which lived in the Pyrenees some 247 to 248 million years ago, but which was not related to any dinosaur.

The several excavation campaigns conducted in 2012 by geologists, biologists and palaeontologists of the Universitat Autònoma de Barcelona (UAB) and the Institut Català de Paleontologia Miquel Crusafont (ICP), together with local geologists in outcrops of the Pyrenees corresponding to the Permian and Triassic periods (ranging from 300 to 200 million years ago), have given way to the discovery of a large amount of new sites.

This week, researchers published in PLOS ONE a new project on the ecosystems of the Lleida Pyrenees during the beginning of the Mesozoic Era. The new studies are based on the vertebrates living there during the early and middle Triassic period (some 247 and 248 million years ago). This gap in time was crucial for the recovery of the ecosystems after the End-Permian extinction (about 252 million years ago), the most devastating known extinction event in the history of Earth, where it is estimated that 90% of species disappeared; far worse than what caused the extinction of dinosaurs.

During the Triassic Period, the configuration of the Earth was very different from today: all continents were united into one called Pangaea. In this geological period the Pyrenees, located at the equatorial level of the planet, were formed by a set of small basins in which river sediments gathered and which gave way to rock formations with a typically reddish colour, highly abundant throughout the Pyrenees, as well as across Europe.

The ichnites preserve excellent details which make it possible to identify their shape. Some surfaces are completely covered in footprints, all pointing in the same direction, a possible sign of gregariousness among archosauromorphs.

The study is based on the analysis of trace fossils (ichnites) left by several groups of reptiles on these sediments, as well as of the ecosystems in which they lived. “Ichnites are very ephemeral fossils and difficult to conserve, but thanks to photogrammetric techniques which obtain 3D models and to the creation of silicone moulds, we were able to identify and preserve them in their registry”, UAB researcher Eudald Mujal explains. The analysis of rocks in three different areas of the Pyrenees has allowed researchers to see the Triassic environments formed by winding rivers and floodplains. In all of these environments lived a large diversity of vertebrates, mostly corresponding to arcosauromorphs, the group of reptiles which later evolved into crocodiles and dinosaurs.

The study of the tracks has demonstrated that the reduced-size arcosauromorphs (approximately half a metre long) were the largest group and, although in less amounts, there were also reptiles measuring over three metres long.

Found among the group of ichnites was the presence of a never before described shape, which has made researchers establish a new ichnotaxon: Prorotodactylus mesaxonichnus. An ichnotaxon is how researchers classify a trace fossil (given that the specific animal which produced the fossil is not known) and is the equivalent of a biological species. Until now, the ichnogenera (genus of a trace fossil) Prorotodactylus was only known to exist in the Central European Germanic basin (Poland and Germany). The ichnites were first attributed to dinosauromorphs, first members of the dinosaur lineage, but the new Pyrenean ichnites reveal that they are related to another group of basal archosauromorphs, thereby discarding the possibility of the new ichnotaxon being related to the dinosaur lineage. 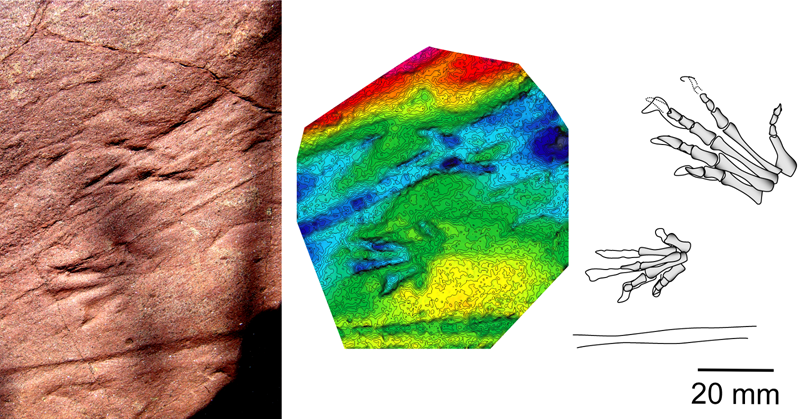 Tracks and footprints of the Prorotodactylus mesaxonichnus. Its morphology (correctly identified thanks to 3D models) is similar to that of the basal archosauromorph group of euparkeriidae.

According to ICP researcher Josep Fortuny “the new Pyrenean footprints indicate that these animals, measuring around half a metre, used all four limbs to walk and often also left marks with their tails. In any case, some footprints point to the possibility of bipedal locomotion in specific moments with the aim of moving faster.” All these characteristics indicate that the authors of the footprints could be the euparkeriidae, a group of basal archosauromorphs known for their fossil remains found from the same time period in Poland, Russia, China and South Africa.

The association of Pyrenean ichnites is similar to that of other areas such as southern France, Morocco, Germany, Poland and the United States. That makes the authors of the study think that the fauna from the early and middle Triassic period were quite homogeneous, at least in the equatorial area of Pangaea, and that river environments, very extensive during these periods, were dominated by the archosauromorphs. Therefore, the authors of the study conclude that this group was key in the recovery of ecosystems after the End-Permian extinction by making use of the large empty ecological niches caused by the mass extinction and allowing the predecessors of the first dinosaurs to spread and diversify.

Part of the areas studied, near the Port del Cantó mountain pass, belongs to the Alt Pirineu Natural Park (PNAP). It is precisely in this park where, in collaboration with the study's researchers, the town council of Soriguera (Pallars Sobirà) and other Catalonian institutions, a project has begun to create the Earth Sciences Discovery Centre in Rubió (Pallars Sobirà). The centre will be in charge of disseminating information on all the geological and palaeontological heritage found in the PNAP. Therefore, all new findings represent essential contributions to the knowledge we have of our planet's past.

More in this category: « Pau and Jordi receive international visitors at the ICP David M. Alba, new director of the ICP »
back to top