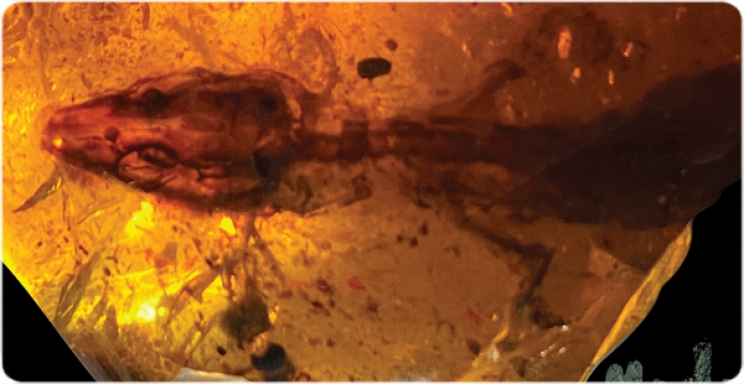 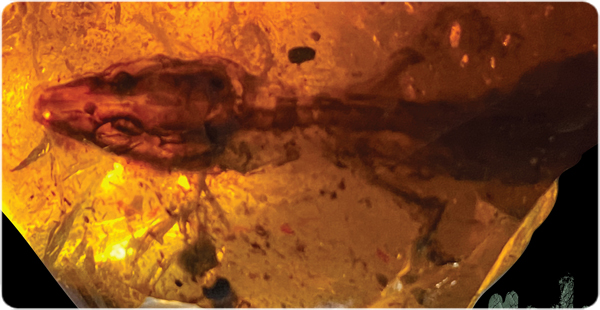 An article published in Scientific Reports describes the new lizard species Retinosaurus hkamtiensis from fossilized remains in amber from Myanmar. This species lived 110 million years ago (during the lower Cretaceous) and is an early representative of a group of reptiles that has survived to this day. Retinosaurus hkamtiensis is the first definite representative group of lizards known as scincoideans that includes several diferent species such as skinks -characterized by extraordinarily small legs- or the armadillo gridled lizard, an armored species that rolls into a ball when attacked.

The specimen included in the amber is extraordinarily well preserved and shows delicate details such as its eyelids. The morphology of R. hkamtiensis ressembles that of the xantusiids, a family of scincoidean lizards whose current distribution is restricted to American southwest, Central America and Cuba, far from Myanmar. The arrangement of the body scales of R. hkamtiensis reveals its relation with current xantusiids, although the research team does not rule out that to be a different lineage that evolved independently

"We had the rare opportunity to study not only an articulated skeleton but also the external appearance of the lizard, the scales, in the same way that herpetologists study current species", said Juan Diego Daza, researcher at the Sam Houston State that coauthored the research. The anatomy of this lizard was digitally reconstructed from three-dimensional images obtained at the Australian synchrotron. "Although digital models generated from computed tomography data can never completely replace the physical objects they represent, they can increase access to museum specimens", says co-author Edward Stanley of the Florida Museum of Natural History. 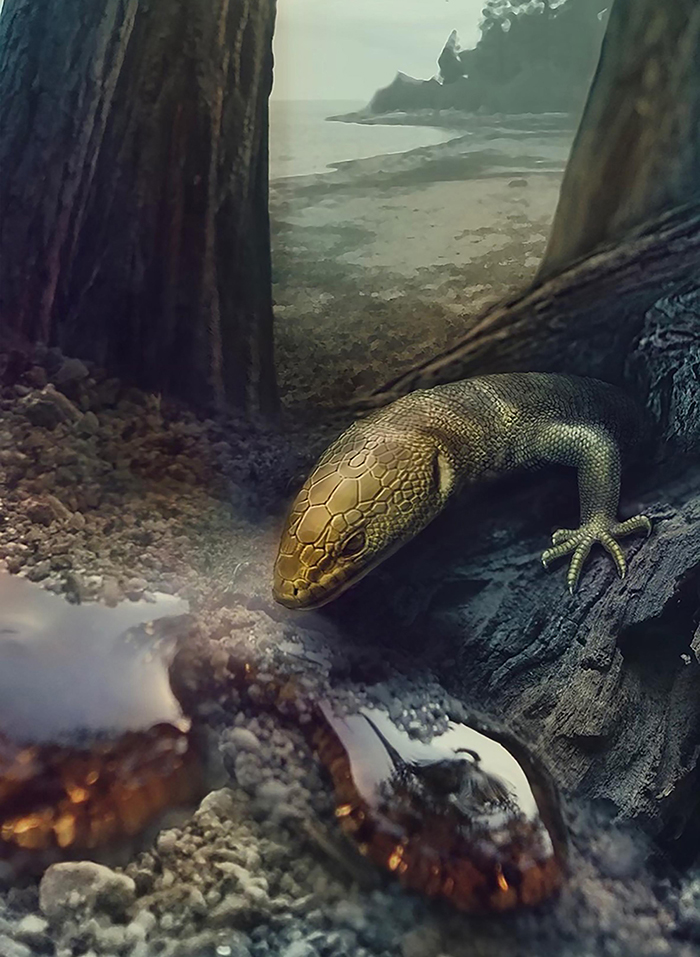 The investigation is led by Andrej Čerňanský from the Comenius University in Bratislava with the participation of researchers from the Villanova University, the University College London, the Peretti Museum Foundation and the Institut Català de Paleontologia Miquel Crusafont (ICP), among others. “We have carried out multiple phylogenetic analysis to try to establish relationships between this form and others based on characters of the skeleton and the pattern drawn by the scales. Although the results point to the scincoideans in general, and in some regard to the xantusiids in particular, more data is needed to obtain a more robust classification”, comments Arnau Bolet, paleontologist at the ICP.

The specimen was found in the Burmese district of Hkamti in a mine located about 100 kilometers from the most famous mines in the Hukawng Basin, which is the one that has provided most of the fossil vertebrates of Myanmar described so far. The new mine is also about 10 million years older, placing its fossils in the Early Cretaceous, a critical period for lizard diversification according to Susan Evans of the University College London (London, United Kingdom) and who leads the line of research. Although fossil lizards from this period are known from other parts of the world, nowhere else the unique ecosystem depicted in Myanmar's amber is preserved.

Myanmar is sadly mired in internal armed conflict and this situation, coupled with the global coronavirus pandemic, has been detrimental to amber miners, particularly in the Hukawng Basin . GRS Gemresearch funds actions in Myanmar to improve the lives of indigenous miners. This research has been carried out in accordance with the ethical recommendations developed by the Society of vertebrate Paleontology .

Main image. Photograph of the specimen embedded in the amber (above) and  digital reconstructed body (Ed Stanley / Florida Museum of Natural History)

More in this category: « The slow pace of life of the Sicilian dwarf elephant Described a new large titanosaurian dinosaur from the Pyrenees »
back to top