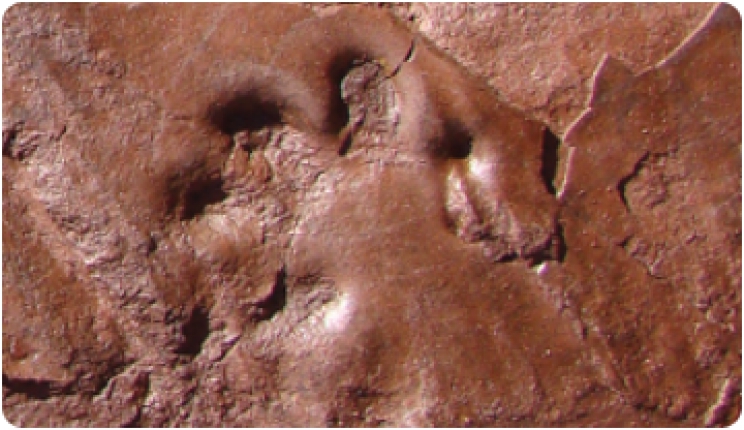 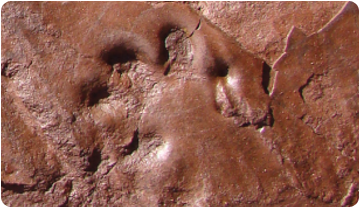 Researchers from the Universitat Autònoma de Barcelona (UAB), the Miquel Crusafont Catalan Institute of Palaeontology (ICP), and the Jaume Almera Institute of Earth Sciences (CSIC), working in the Manyanet Valley (Pallars Jussà, Lleida), have identified various tracks made by tetrapod animals between 280 and 290 million years ago, which makes them the most ancient fossil footprints in Catalonia. They correspond to different groups of primitive reptiles and amphibians, among which are synapsids, the group that would later give rise to the mammals.

The ichnites or fossilised footprints of the Manyanet Valley (within the municipality of Sarroca de Bellera) are in two areas that differ in their environments: meandering fluvial systems in one and unconfined waters in the other. These two palaeoenvironments would have been inhabited by groups of different tetrapods during the Permian Period. The early tetrapods (from the Ancient Greek word meaning "four-footed") were the first vertebrates to tread terra firma, developing lungs to capture atmospheric oxygen and turning fins into legs, but with a life cycle that was still closely tied to aquatic environments.

In what used to be a fluvial zone the researchers have identified ichnites (footprints) of temnospondyls (the predecessors of today's amphibians) of different sizes. "They are a group with a life pattern similar to that of present-day salamanders. Some species sucked up their food while others hunted actively, in a similar way to today's crocodiles", explains Eudald Mujal, a researcher in the UAB Department of Geology who is in charge of the study. In this area there is greater biodiversity than in the area of unconfined waters and it includes ichnites from other groups, like seymouriamorphs, a peculiar group of animals that were almost a metre long, mid-way between the amphibians and the diadectomorphs: reptile-like animals that already laid hard-shelled eggs and could grow to up to two metres in length, approximately.

In the area where the open water used to be, the researchers have identified traces of captorhinids, a group of medium-sized (up to half a metre long) primitive reptiles with several rows of teeth, which became extinct at the end of the Permian. They have also found synapsids, the precursors of present-day mammals. "We have identified footprints of pelycosaurs, a group of synapsids that could reach four metres in length and which, in some cases, featured a sail along the spine whose function we do not know", explains Dr Mujal. The pelycosaur group died out at the end of the Permian, but another group of synapsids, the cynodonts, went on to give rise to the mammals eventually.

During the Permian all land masses were joined together in a single super-continent known as Pangea, located approximately on today's Equator and reaching as far as the Poles. In this study the researchers compare the ichnites of the Manyanet Valley with those found in what was the centre of this super-continent and they conclude that the faunistic differences observed could be due to differences in climate. "We have realised that, in similar palaeoenvironments, the associations of ichnites, and therefore of tetrapods, change. These changes coincide with the different palaeoclimate zones proposed in the models, so the faunal distribution was probably climate-related", comments Josep Fortuny, an ICP researcher who took part in the study.

The Permian began around 300 million years (Ma) ago and ended around 250 Ma ago, leading into the Triassic, which lasted till about 200 Ma ago, and in which the dinosaurs first appeared. These two periods were of crucial importance for the history of life, as their boundary is marked by the greatest extinction the Earth has ever witnessed, when over 90% of its species disappeared: an extinction event far superior to the one that ended the reign of the dinosaurs at the end of the Cretaceous.

The findings were published in the journal Geological Magazine, of Cambridge University Press.

More in this category: « On the trail of a lame dinosaur in La Rioja The first 3-D atlas of the extinct dodo »
back to top