Pliobates cataloniae, a new primate species at the root of the tree of extant hominoids 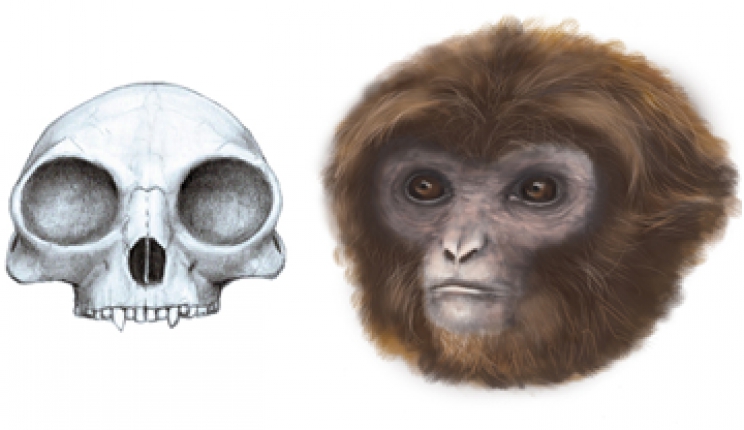 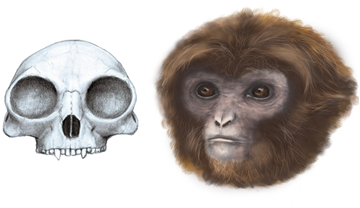 A team of researchers from the ‘Institut Català de Paleontologia Miquel Crusafont’ describes in the Science magazine the new genus and species, Pliobates cataloniae, based on a skeleton recovered from the landfill of Can Mata (els Hostalets de Pierola, Catalonia, Spain). The fossil remains belong to an adult female individual named “Laia” by her discoverers. “Laia” weighed 4-5 kg, consumed soft fruit items and moved through the forest canopy by climbing and suspending below branches. Pliobates lived 11.6 million years ago and precedes the divergence between hominids (great apes and humans) and hylobatids (gibbons), which has important implications for reconstructing the last common ancestor of both groups.

Living hominoids are a group of primates that includes the small-bodied apes (the lesser apes, or gibbons and siamangs, which constitute the family Hylobatidae) and the larger-bodied great apes (orangutans, gorillas and chimpanzees), which, along with humans, belong to the family Hominidae. All extant hominoids share several features, such as the lack of external tail, an orthograde body plan that enables an upright trunk position, and several cranial characteristics. All these features might have been present in the common ancestor of hominids and hylobatids that, according to molecular data, would have lived about 15-20 million years ago.

Researchers from the ‘Institut Català de Paleontologia Miquel Crusafont’ (ICP) have described the new genus and species of extinct hominoid, Pliobates cataloniae, based on a partial skeleton composed of 70 fossil remains found in 2011 in one of the sites within the stratigraphic series of Abocador de Can Mata (els Hostalets de Pierola, Barcelona, Catalonia). These include most of the skull and dentition as well as a considerable portion of the left arm, including several elements of the elbow and wrist joints. They belong to an ape similar in size to the smallest of living gibbons (4 to 5 kg), which lived 11.6 million years ago. Pliobates shows, for the first time in a primate fossil of this size, a set of characteristic features of extant hominoids, presumably inherited from their last common ancestor, which probably lived in Africa several million years before Pliobates. 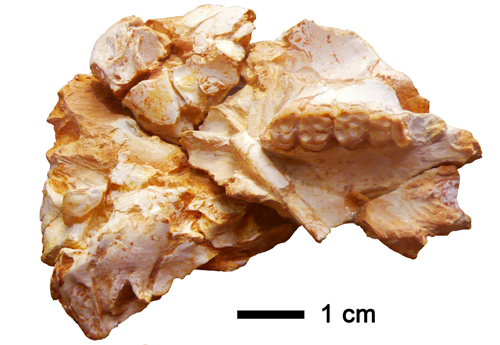 This find radically changes the hitherto accepted morphotype of the hylobatid-hominid ancestor and provides very solid clues about the origin of extant gibbons. “The origin of gibbons is a mystery because of the lack of fossil record, but until now most scientists thought that their last common ancestor with hominids must have been large, because all of the undoubted fossil hominoids found so far were large-bodied", explains David M. Alba, the ICP researcher leading the study published in the journal Science. All the small-bodied (5 to 15 kg) fossil anthropoids found before Pliobates displayed a body plan too primitive to be closely related to extant hominoids. “This find overturns everything”, according to this ICP researcher.

Pliobates retains some primitive characteristics. However, its arm anatomy, specifically the wrist bones and the joint between the humerus and radius, already possesses the basic design of living hominoids. A phylogenetic analysis, based on more than 300 characters, very consistently places Pliobates as the stem hominoid closest to the divergence between lesser and great apes (hylobatids and hominids, respectively), and suggests that the last common ancestor of extant hominoids might have been more similar to living gibbons than to the extant great apes than previously thought.

Long bones from the left arm of Pliobates cataloniae. Humerus (A), radius (B) and ulna (C). (ICP)

In fact, the skull and some parts of the postcranial skeleton of Pliobates cataloniae show some features that are exclusive to extant gibbons. “This suggests that, alternately, Pliobates might be the sister group of extant gibbons only", asserts Salvador Moyà-Solà, ICREA researcher and director of the ICP, who also participated in the study. “We hope that future discoveries in the landfill of Can Mata will help us to clarify the role played by small-bodied catarrhines in hominoid evolution and, finally, to solve the enigma of extant gibbons’ origins”, concludes Moyà-Solà.

The adaptations of the postcranial skeleton of Pliobates cataloniae are indicative of a locomotor repertoire mostly consisting in slow and cautious climbing through the canopy, with a great flexibility of movement and some capacity of below-branch suspension. Its encephalization degree was similar to that of living monkeys and gibbons, but lower than that of living great apes. Microscopic marks left by food items on the occlusal surfaces of its teeth shortly before death indicate an essentially frugivorous diet (i.e., based mainly on ripe and soft fruit), like in living gibbons.

The cranial remains were so fragmentary that researchers relied on a virtual reconstruction based on high-resolution computed-tomography imagery to study them.

The skull of Pliobates has been virtually reconstructed based on high-resolution scans. Frontal (A), side (B) and basal (C) views are shown. (ICP)

The name of the new genus (Pliobates) is a combination of Pliopithecus (which means “more ape”) and Hylobates (“the one who walks or haunts”), in allusion to the primitive similarities with other previously-known small-bodied anthropoids (pliopithecoids) and the resemblances, in derived features, with extant gibbons (hylobatids). The species epithet (cataloniae) is a geographical reference the location of the site in Catalonia. The specimen has been nicknamed “Laia”, a familiar diminutive of “Eulalia”, the patron of Barcelona, which literally means “well spoken, eloquent” because of the new knowledge that means to science.

The finding of Pliobates proves once again that the complex of sites at Abocador de Can Mata is one of the most important places worldwide to study the origin of extant hominoids. The paleontological surveillance performed during the enlargement of the landfill over the last 13 years, under the scientific supervision of the ICP, has enabled the recovery of extraordinary fossil primate remains from 12.5 to 11.5 million years ago. Most noteworthy are the skeleton of Pierolapithecus catalaunicus (known as “Pau”), found in 2002 and described in 2004, as well as the skull of Anoiapithecus brevirostris (“Lluc”), described in 2009.

Panoramic view of the works in the Can Mata landfill (els Hostalets de Pierola).
The site where the remains of the new hominoid were found is shown on the left (J.M. Robles / ICP)

During the middle and early late Miocene, the area where the current landfill is located was a closed forest with a warm and wet climate with some permanent waterbodies nearby. This environment facilitated a great faunal diversity, as it is represented by the nearly 80 mammalian species that have been identified at the site, in addition to several amphibians, reptiles and birds. Thus, besides hominoid and pliopithecoid primates, small mammals (insectivores and rodents), ungulates (such as horses, rhinos and deer), many carnivorans (including those known as "false saber-toothed cats", currently extinct), and proboscideans distantly related to modern elephants have been found in this area. 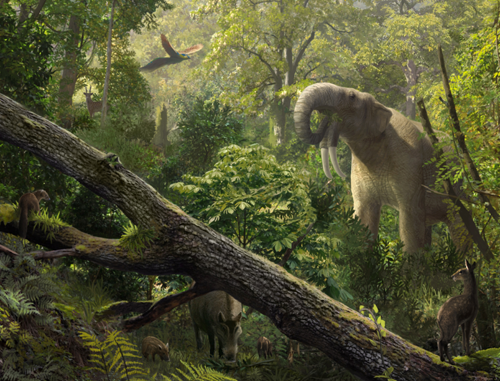 Representation of the environment and some of the species that inhabited the area of els Hostalets de Pierola about 12 million years ago (Oscar Sanisidro / ICP ).

More in this category: « When flying squirrels glided in Sabadell On the trail of a lame dinosaur in La Rioja »
back to top