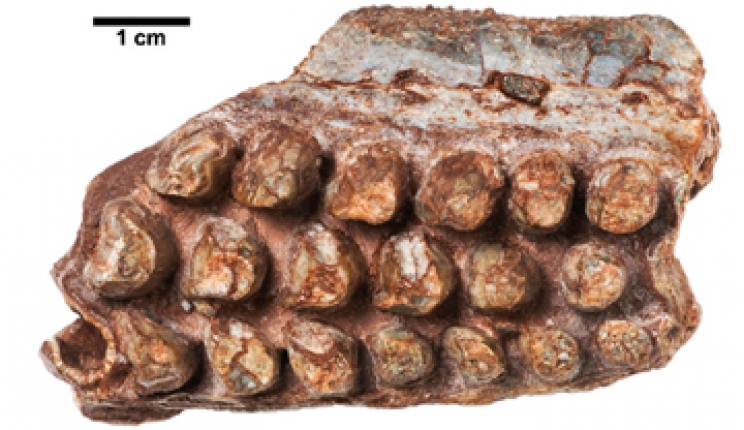 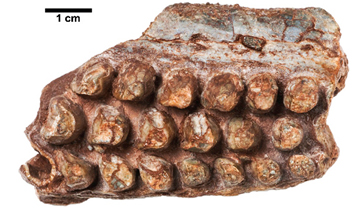 A fortuitous finding provides first evidence for the presence of a Permian captorhinid reptile in Southern Europe. Belongs to a group of early reptiles which is characterized by the possession of several distinctive tooth rows. Catalan and German researchers collaborated in the study of the fossil, which will be housed at the Museu Balear de Ciències Naturals, at Sóller (Mallorca).

Mrs Lieselotte Hannen is a german tourist who, since she retired, lives in Mallorca. In the year 2002, during one of her usual walks in Cala Gata, a beach at Port d’es Canonge (Malloca), she stopped in front of a strange-looking piece of rock. When she took a closer look, she discovered some tooth rows on the surface and took the rock home. In 2007, the family Hannen handed the specimen to the Steinmann-Institut für Geologie, Mineralogie und Paläontologie in Bonn, Germany. Martin Sander, a vertebrate paleontologist at Bonn University, identified the specimen as a captorhinid reptile and contacted Josep Fortuny and Àngel Galobart, researchers from the Institut Català de Paleontologia Miquel Crusafont (ICP) (Barcelona) and Torsten Liebrecht and Johannes Müller, researchers from the Museum für Naturkunde (Berlin), for studying the specimen together.

This week the study has been published in the Journal of Vertebrate Paleontology, the major scientific journal in the field of vertebrate paleontology. The researchers showed that the specimen corresponds to a cranial fragment of a captorhinid reptile, which lived at about 260 million years ago. The captorhinids are a group of early reptiles which lived from about 300 million years ago until the end of the Permian, about 250 million years ago. Captorhinids are a well-known group in North America, Africa and Asia. In Europe the group is known particularly from Russia, while evidence for its presence in the rest of the continent has so far been scarce. 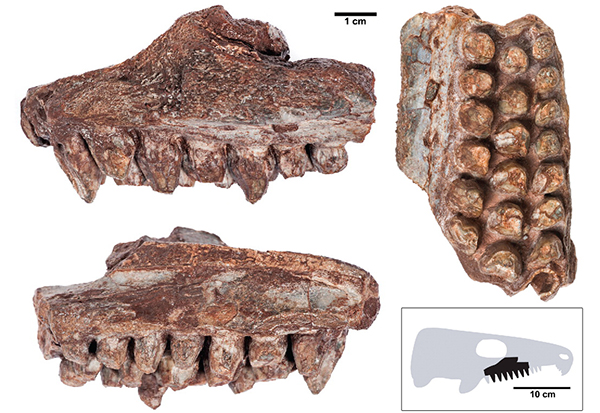 The maxilla found in Mallorca represents the first direct evidence of these animals in Southern Europe and corresponds to a special group of large-sized captorininds called moradisaurines, which are characterized by the possession of multiple distinctive tooth rows in the “cheek” region of the upper and lower jaw. It is believed that these “tooth batteries” were used for grinding tough material. These animals are thought to be plant eaters, whereas they might also have fed on insects. The skull of moradisaurines could achieve up to half a meter in length with a complete body size up to 2 meters. The name of the group moradisaurines is derived from the genus Moradisaurus, which was found in the Moradi Formation, in north-central Niger. In the whole world, the moradisaurines were known from fossils from Niger, Morocco, North America, India, Germany and China. Now it is also known in Mallorca.

Life reconstruction of a captorhinid reptile
(Smokeybjb / under CC BY SA 3.0 license)

The Mallorcan specimen lived just before the End Permian mass extinction that caused the disappearance of about 90% of marine species and also had a devastating effect on the terrestrial faunas. Although the end Cretaceous mass extinction (which caused the end of the “reign of the dinosaurs”) is better known to the general public, the end Permian extinction was more deadly and is usually known as “the mother of all mass extinctions”. Neither moradisaurines nor any other captorhinid – quite abundant during the Permian – survived this global event. At this time Mallorca was not an island; all the Balearic Islands were emerged and in contact with the Iberian Peninsula which was not a peninsula but surrounded by Europe, Africa and North America as part of a huge land mass called Pangaea.The climate was warm with a monsoonal cycle.

The fossil is currently in Berlin, but in the next weeks will be brought to the Museu Balear de Ciències Naturals at Sóller (Mallorca) for long-term storage. This study involved researchers from the Institut Català de Paleontologia Miquel Crusafont (ICP) of Barcelona, Museum für Naturkunde in Berlin, and the Steinmann-Institut für Geologie, Mineralogie und Paläontologie in Bonn.

More in this category: « Skin impression of one of the last european dinosaurs David M. Alba named new editor-in-chief of JHE »
back to top