New insights on the diversification of large toothed pterosaurs 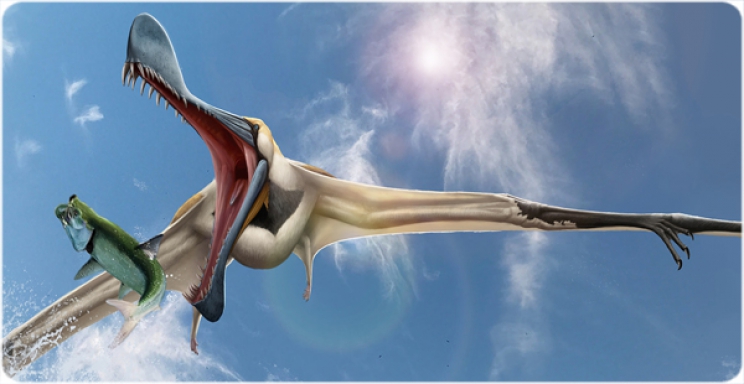 A life illustration of Tropeognathus mesembrinus, the massive and largest anhanguerid known to date. Illustration by courtesy of Hugo Salais-López / Metazoa Studio 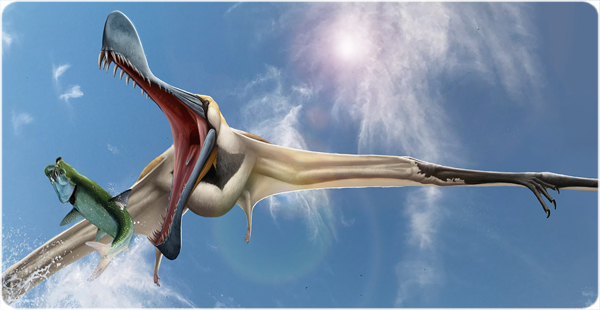 A new study led by Borja Holgado, research collaborator at the Institut Català de Paleontologia Miquel Crusafont (ICP), brings a new focus on the understanding of anhanguerids, a lineage of large toothed pterosaurs characterized by blade-like crests at the tip of their snouts. The research has been published in Acta Paleontologica Polonica.

Pterosaurs are one of the most iconic groups of extinct vertebrates and they ruled the skies when the dinosaurs walked upon the earth. Among them, one of the most incredible lineages of pterosaurs were the anhanguerids, characterized by large wingspans –from 3 to 8.5 meters–, long and sharp teeth, and big heads with peculiar blade-like crests at the tip of their snouts. Today, we recognize fossil specimens attributed to anhanguerid pterosaurs all over the world: Australia, Brazil, China, Morocco, the Iberian peninsula and the British isles.

Among the specimens from the British Isles are the oldest known anhanguerid species, as Coloborhynchus clavirostris, Aerodraco sedgwickii or Nicorhynchus capito but, because of the fragmented nature of their remains, very little was known on these species. This new study sheds light on the characterization of these anhanguerids –all recognized within the lineage Coloborhynchinae– and the relationships between them and other non-coloborhynchine anhanguerids.

In addition, the authors describe a new coloborhynchine species, named Uktenadactylus rodriguesae, from the Isle of Wight (a small island of south England renowned for having some of the richest cliffs and quarries for dinosaur fossils in Europe). The holotype consists in a small piece of the rostral tip, bearing distinctive features which allow to recognize it as belonging to the genus Uktenadactylus, a coloborhynchine taxon which was exclusively known from North America. The specific name honors the Brazilian paleontologist Taissa Rodrigues, who recognized the genus Uktenadactylus as different from Coloborhynchus.

The new research includes the discovery of a new pterosaur species: Uktenadactylus rodriguesae.
From left to right: a detail of a quarry from the Isle of Wight; a rostral picture of the new species holotype; and a picture of Dr. Taissa Rodrigues, honored in the specific name.

Thanks to this new approach with special focus on the coloborhynchines, the paleontologists Borja Holgado and Rodrigo Pêgas have changed the view on the relationships not only between such lineage of –mainly– northern hemisphere anhanguerids, but also on the large southern hemisphere species as Tropeognathus, Ferrodraco or Mythunga, which now are related in the new clade Tropeognathinae. It is worth highlighting that, among the tropeognathines, these researchers have found the largest anhanguerid species, which is the Brazilian Tropeognathus mesembrinus which exceeded 8.5 m of wingspan.

More in this category: « A stolen fossil leads to the description of a new crocodile species in the Pyrenees The rodents of the Miocene of the Vallés-Penedés, subject of Silvia Jovells doctoral thesis »
back to top