The fossil ear : an open way to the locomotion of anthropomorphic primates 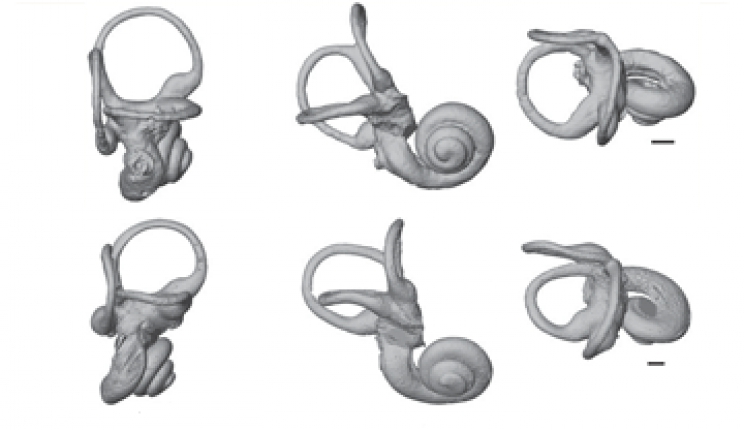 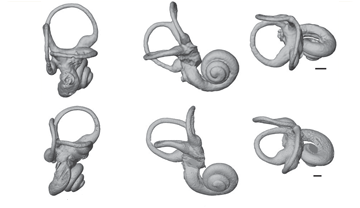 The design of the semicircular canals in the ear is very sensitive to the locomotion of extant hominids. This system detects the head rotation and can coordinate posture and body movements, along with other acoustic and visual signals, as well as of environment perception. The study of these channels in the fossil record is presented as an alternative way to reconstruct evolutionary changes in the locomotion of anthropomorphic primates. The Proceddings of the Royal Society B have just published these results in a paper signed by researchers from different countries and institutions, including Meike Köhler and Salvador Moya ICREA researchers at the ICP.

Inferences about the locomotion of extinct forms of primates are often based on the fossil remains of the postcranial skeleton. But for many species of anthropoid primates, the fossil record is sparse. The study of the inner ear structure, when this has been preserved, allows an independent reconstruction of the evolution of locomotion in this group of mammals, and thus becomes a way to test hypotheses about the type of locomotion of some taxa, which were so far based on the study of postcranial remains.

The semicircular canals are structures composed of three bones in the ear of vertebrates, which are oriented in the three dimensions of space and on which depends the sense of balance and spatial orientation in the three-dimensional world of the trees, in the case of primates. In general, the details of its design reflect an important set of information on the locomotion of different species. 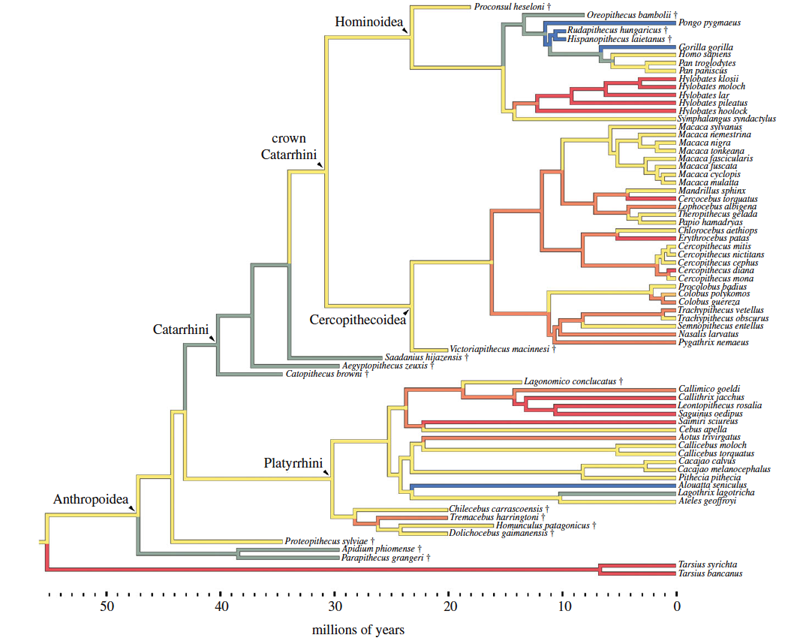 In "Evolution of Locomotion in Anthropoidea: the semicircular canal evidence", published in the online edition of the prestigious journal Proceedings of the Royal Society B by a collaboration of researchers from a dozen centers, most notably the Pennsylvania State University and the University of Toronto in America or the Max Planck Institute in Europe, analyzed up to 16 skulls of fossil primates from around the world, which record the group's evolution over the past 35 million years. Among these are  the skull of the fossil specimen Hispanopithecus laietanus recovered from Can Llobateres (Sabadell).

CT scan analysis of these channels has allowed some conclusions on the evolution of anthropoids locomotion. The main conclusions are that primordial apes, dating back some 35 million years ago, were slow primates with a caution arboreal locomotion. The evolution of this type of locomotion led to the New World monkeys, also known as Platyrrhini, which were more nimble and quick to move through the trees. In contrast, African catarrhine kept slower ancestral locomotion, and only a few groups later became more agile. This is the case of gibbons or some fossil forms as Proconsul heseloni, a  primitive hominoid from the Early Miocen in Africa. Catarrhines include the Old World monkeys, Hylobatidae and hominids, including modern chimpanzees, gorillas, bonobos and orangutans.

The findings on the basal locomotion of these apes agree with those obtained from the study of postcranial remains. In contrast, in the case of new world monkeys, the postcranial fossils are few, and it is thanks to the study of the semicircular canals of the ear that we can infer some information from their locomotion, more agile and quick. For the locomotion of catarrhines, the results from the fossil remains of the inner ear supplement the information from postcranial remains, wich for some species is in part contradictory. We will have to wait to the discovery of new remains and the the improvement of morphological analysis techniques to better understand the evolution of apes locomotion during the Miocene.

More in this category: « A study reinforces the hypothesis that the extinction of dinosaurs could had been sudden due to an asteroid impact on Earth A new CT equipment at the ICP »
back to top