The skilled hands of the fossil hominoid Oreopithecus bambolii 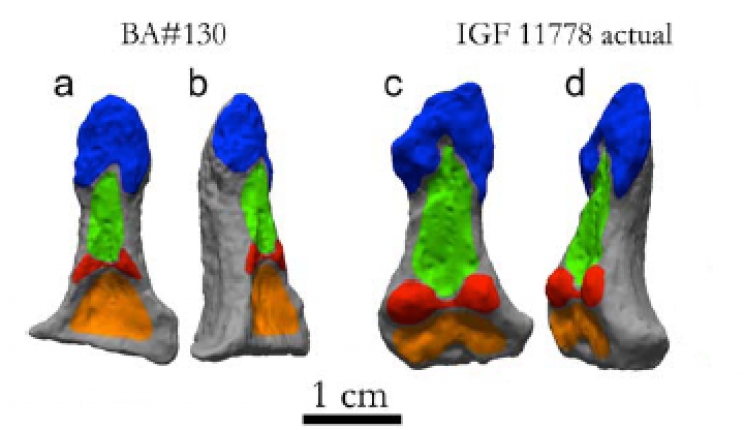 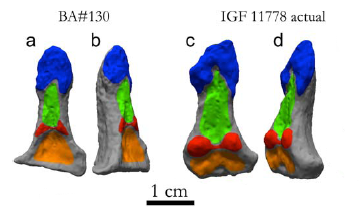 The study of the distal phalanx of the thumb of the fossil hominoid Oreopithecus bambolii has revealed that this species had the ability to grasp objects with precision between the fingers like humans do, with a much higher accuracy than the extant and fossil hominoids can perform. Such adaptation would have improved their ability to obtain and process food manually in the insular environment with limited resources where this species lived about 7 million years ago. The finding was published in the American Journal of Physical Anthropology by Sergio Almécija, associated researcher at the Institut Català de Paleontologia Miquel Crusafont (ICP).

Oreopithecus bambolii is a hominoid species that lived between 8.2 and 6.7 million years ago in the area that is now part of Tuscany and Sardinia (Italy). The most complete skeleton was discovered in 1958 in a coal-mine and belongs to an adult male of about 30 kilos nicknamed "Sandrone". Although Oreopithecus is the most well known European hominoid fossil thanks to well-preserved postcranial remains (skeletal parts that are not part of the skull), its classification has been controversial over the years among the scientific community. Although it is now considered a hominoid, during part of the last century some authors interpreted it as an Old World monkey (the group comprising macaques and baboons, among others), and even considered as an early hominin (the group that includes humans and their fossil ancestors). These changing phylogenetic interpretations were partially caused by the complex combination of ancestral, modern and very derived characters shown by their remains.

The hand anatomy of Oreopithecus —and particularly the morphology of its thumb— has been the subject of much controversy and several scientific publications over the past 25 years. In the article published in the American Journal of Physical Anthropology, the researcher of the Institut Català de Paleontologia Miquel Crusafont (ICP) Sergio Almécija, Marvin Shrewsbury (an American physician specialist on hand anatomy), Salvador Moya-Solà (ICP) and Lorenzo Rook (University of Florence), compared the morphology of the distal phalanx of the thumb of Oreopithecus with those of other living and fossil species: humans, several species of monkeys, extant apes (gibbons, orangutans, gorillas and chimpanzees), as well as fossils such as Proconsul or Pierolapithecus (the species found in Hostalets of Pierola and described by the specimen nicknamed as Pau). 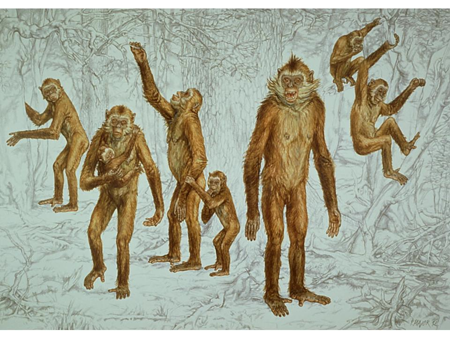 The study concludes that the proportions of the distal phalanx of the thumb of Oreopithecus are similar to apparently so different extant species such as gibbons and gorillas, fossil species as Orrorin (one of the first members of the human lineage) or Proconsul, what researchers have interpreted as an ancestral feature of the group. However, the phalanx of Oreopithecus shows some anatomical features that are only found in extant and fossil humans that have previously been linked to the human ability to grasp objects using a precision grip between the proximal pads of the thumb and the rest of fingers, a skill that is known as the pad-to-pad precision grip. Meike Köhler and Salvador Moyà (researchers at the ICP), along with Lorenzo Rook had previously reported these human-like manipulative skills in Oreopithecus in an article published in 1999 in the journal PNAS. 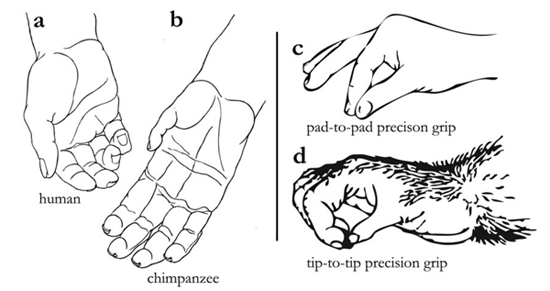 The vast majority of non-human primates are able to delicately manipulate objects using the thumb and one or more fingers, but among all of them humans are the only ones that can perform this pad-to-pad precision grip. This is possible because human thumb is robust and long in relation to the other fingers. In extant apes such as chimpanzees, thumb is proportionately much shorter so they can only grab objects between the tips (tip-to-tip) or between pad or tip and sides of the fingers (pad-to-side). Moreover, Oreopithecus exhibits an area for insertion of a long flexor muscle, and arrangement that has only been found in humans and fossil relatives and linked to enhanced manipulation skills.

The ability to perform this precision grasping in Oreopithecus can be explained by the characteristics of the environment in which this species lived 7 million years ago, when the area of Tuscany and Sardinia were part of an island. Under insular conditions, animals develop special adaptations to enhance energy processing. Since food is often a limited resource and usually there are no terrestrial predators, these adaptations often include improved harvesting and reduction of energy expensive locomotor behaviors. In the case of Oreopithecus, its manipulation skills would have improved its harvesting feeding capabilities, and thus its fitness.

More in this category: « A strange couple: Mesopithecus and fossil macaques in the Late Miocene The femur of Orrorin tugenensis, a new step towards the origins of bipedalism »
back to top