Following the tracks of carnivorous dinosaurs in a Swiss highway 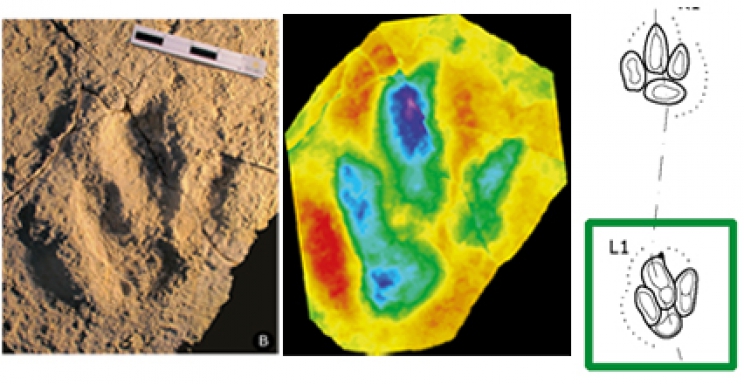 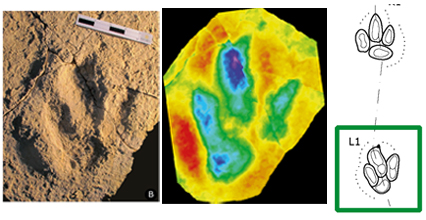 An international team of paleontologists led by Novella Razzolini, researcher at the Institut Català de Paleontologia Miquel Crusafont (ICP), describes the new 150-million-years-old type of carnivorous dinosaur footprint Megalosauripus transjuranicus. Scientists studied more than 300 tridactyl trackways in Switzerland before the site was partially destroyed by the construction of a highway. The research has been published in PLOS ONE. In another recent article, the same team of researchers describes one of the world's largest carnivorous dinosaur footprints that belonged to an animal of a similar size of Tyrannosaurus rex.

Researchers analyzed tridactyl (with three fingers) tracks from different sites along the Canton of Jura (in Switzerland, near the French border) to describe the new footprint species Megalosauripus transjuranicus. In paleontology it is very difficult to link a footprint to a specific animal species so traces are classified using a specific nomenclature: ichnogenus and ichnospecies. These footprints have been classified as Megalosauripus because its resemblance to other traces of this kind but are different enough to be considered a new species. 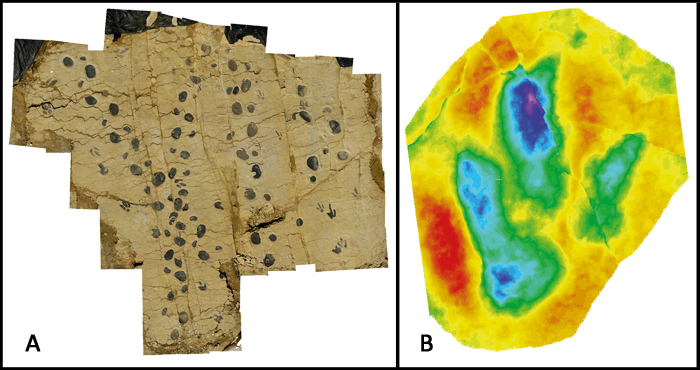 Traces of Megalosauripus transjuranicus measure about 45 cm in length and belonged to a carnivorous dinosaur of an estimated size between 7 and 10 meters, within the range of Allosaurus. Researchers have also detected tracks in the area that could belong to another animal, possibly an ornithopod, a group of herbivorous dinosaurs. The study has been published in the journal PLOS ONE.

In another article published a few weeks ago in Historical Biology, the same group of researchers described the new ichnogenus and ichnogspecies, Jurabrontes courtedulensis from the same tracksites. The largest Jurabrontes tracks are 77 cm in length and are among the largest tridactyl dinosaur footprints worldwide. "It’s a huge footprint that reveals the presence of large carnivores in this area", says Novella Razzolini, researcher at the Institut Català de Paleontologia Miquel Crusafont. "We think that belonged to a Torvosaurus, one of the largest genus of carnivores that lived during the Jurassic", she explained.

These animals could reach up to 12 meters in length. The size of its footprint and therefore the size of the animal was close to that of the famous T. rex, which would appear several million years after Torvosaurus, during the Upper Cretaceous.

The researcher at ICP, along with Swiss researchers at Paléontologie A16 and the Museum of Natural History in Basel, have photographed and obtained 3D models and casts of the best preserved traces of this tracksite. The site was affected by the construction of a motorway across the Canton of Jura, near the bordering with France, built in 2014. During the works in the motorway, an important part of the site was destroyed. The findings reveal the extraordinary fossil record of this area in relation to dinosaurs between 163 and 145 million years ago.

More in this category: « David M. Alba, new director of the ICP The ICP presents 30 abstracts at the EAVP 2017 »
back to top