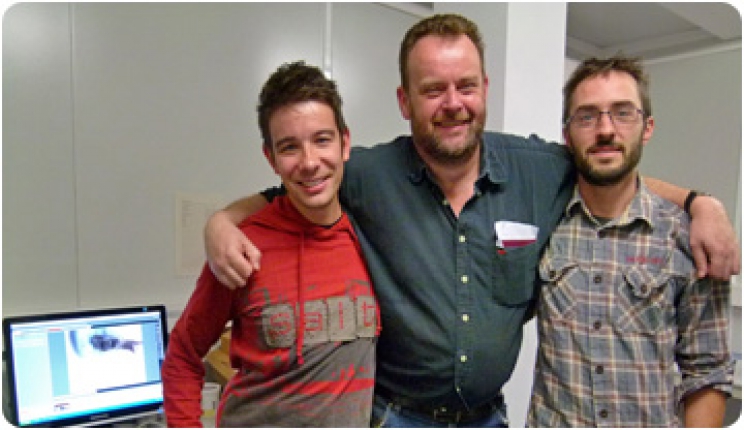 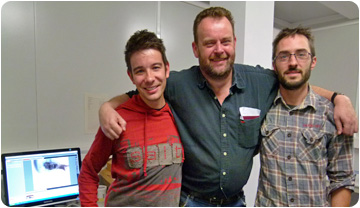 Lars van den Hoek, with researchers Isaac Casanovas and Marc Furió, during his visit to ICP.

The ICP was pleased to receive the visit of Lars van den Hoek Ostende, a Dutch researcher and one of the expert voices on fossil insectivores in Europe.  The reason for his visit was to work with Isaac Casanovas and Marc Furió, members of the research group of Neogene & Quaternary faunas, analyzing Miocene insectivores data to understand trends in diversity in Central Europe and Spain

Why did you decide to specialize in insectivores?

Well, I always thought that large bones were very nice. You know, you can hold them and it´s real. And I asked to a paleontologist that worked with large bones if I could collaborate with him. He told me “yes, but you also have to look at rodents and smalls mammals first”. So I did it for three weeks and that was everything.  You can do much more calculations; you can much better look at the environmental change. Of course, you have to study each detail, but you have a lot of material. One of the paleontologists at that time was a specialist in insectivores and I studied with her. Later I became one of the insectivore’s guys in Europe.

Could you tell us about the work you are doing with Isaac Casanovas and Marc Furió on the analysis of insectivores in Spain?

I’m in several projects, both  with Isaac and Marc. I’m here particularly because we are writing a paper in which we are trying to see how real the extinction was, the Vallesian crisis I mean. We have this wonderful locality, Can Llobateres, which is the dream of every paleontologist. There is a huge amount of material and, of course, every European locality compared to that is poor. So could be that maybe is just because Can Llobateres is such a rich locality that we think that afterwards they are poor. And the only way to find out is to count everything you have, from all these localities in Europe. And then start calculating if we have small sample sizes of Can Llobateres, will this still be a very rich locality?. We are convinced that it is. There was a very high diversity here in the Vallès-Penedès basin during the late Miocene.

Besides this collaboration, can you explain a bit about other research lines you are working on right now?

I’m working on trying to understand how mammals in Europe came to be in certain places at certain times. And this is also part of this project. One of my other great hobbies is island evolution; we have a strong tradition in island evolution in the Netherlands. And with island evolution these days, because of the work of Meike Köhler, there are really new things to do with island’s mammals. So we immediately came back to the ICP, you see! I’m very sorry we couldn’t meet this week, as she happens to be out. But in a few months we will meet, as we happen to be the two keynote speakers, to talk about island evolution, in a congress.

Yes, another ICP collaboration then. How long have you been collaborating or in contact with ICP? Can you explain us more about this story? When did it start?

The story of the working together Dutch and Catalans paleontologists starts when my old teachers were about the age of Mark and Isaac now. So it’s a very long story. For me, soon after I became curator at the Naturalis, the Netherlands Center for Biodiversity, I got a phone call from Jordi Agustí, then at the Institut de Paleontologia de Sabadell, who said to me “I want you to help one of my students. Can you come over for a couple of months?” That was Marc, and a bit later I met Isaac, and there is how I personally became acquainted with the ICP. But the connections have been there for a long, long time.

So you have seen us growing during a few years by now. How do you see us now?

Yes, I have seen you growing. The ICP has a long tradition, but that is not enough. But, and I am really honest, by the time Salvador Moyà took over here I saw an enormous growth in the ICP, which makes it, at least in my field, one of the three top institutes in Europe at the moment. 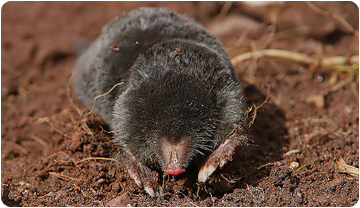 You have a particular interest in rebuilding and creating maps of Neogene European ecosystems. Can you tell us why it is so important to create these maps?

We talk a lot of biodiversity, but we really don’t understand biodiversity. And by making these maps, by looking at the history of life, which is always changing and in evolution, you can far better have a picture of what determines biodiversity than simply looking at the world near today. Paleontology has a very strong message in the entire biodiversity debate.

You wanted to publish a book about the mammals of the Ice Age, weren't you? Why is it important to get involved in popular science?

Well the book is in a dusty corner at this moment! Scientists are paid by the community in order to do things that they love.  But you can only do that if you are also involved in getting things back to the community. Everyone loves dinosaurs. A lot of people are interested in how life came to be. I have that knowledge and it is my obligation to share that with whoever wants that, whether it is a 6 year old on the beach or a 26 year old boy who read a book to know more about it. Scientists are there to help people understand or do they own further explorations.

And do you think popular science is something easy to do?

For me it is because l love my job and I have always worked in museums, in contact with people. Some people in science get a bit lost in their studies, and they need other people to translate they work to the general public.

What are your future plans in research? Other projects with or without us?

Probably with you! One of my big dreams at the moment is to unit as many people as possible working on the continental Europe, whether it is in plants, or in rodents, or in large mammals, or in the lakes, to tell the story about the evolution of life in Europe together, between 20 to 5 million years ago. So there is something we need to work on together Catalans, Spanish, Dutch, …, and I’m trying to get that group together now. And in the mean time I try to have fun with fossils and with as many people as I can!

Thank you very much, Lars. See you in a few months then!

This interview has been edited by Carolina D'Amico Ongaro, student in the master's degree in Scientific, Medical and Environmetal Communication, from UPF