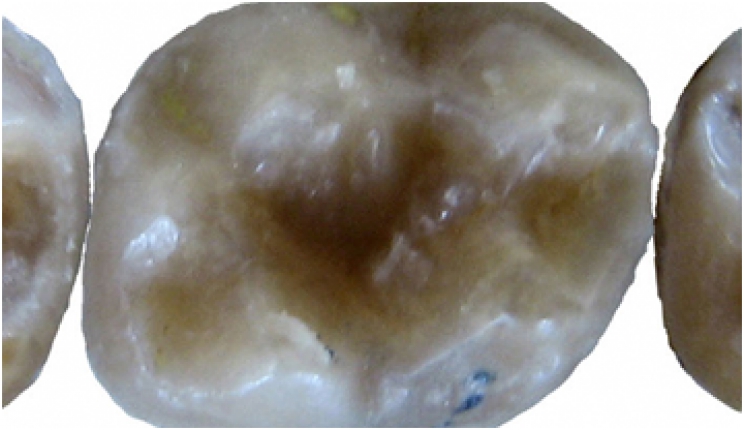 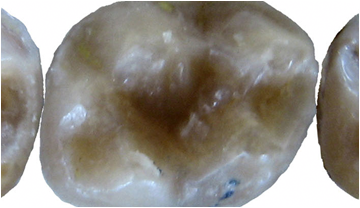 Researchers at the ICP published in the ’American Journal of Physical Anthropology' the description of a new genus of a pliopithecid primate, based on Miocene fossils from the site of Castell de Barberà. This new genus and species have been named Barberapithecus huerzeleri.

The recovered remains include much of the dentition of a female individual, and some isolated teeth of other individuals.

In another article in this journal, researchers at the ICP have published the oldest pliopithecid fossil remain from the Iberian Peninsula, in this case a tooth recovered from one site of Abocador de Can Mata

Researchers at the ICP David M. Alba and Salvador Moyà sign the article "A new genus pliopithecid (Primates: Pliopithecoidea) from Castell de Barberà (Vallès-Penedès Basin, Catalonia, Spain)" published in the prestigious ‘American Journal of Physical Anthropology’. This work describes in detail a new genus of primate, Barberapithecus, from fossil remains recovered at the site of Castell de Barberà (Barbera del Vallès, Catalonia, Spain). Barberapithecus huerzeleri is a Miocene pliopithecid, about some 11 million years old, which is named in recognition of the site where it was found and of the Swiss paleontologist Johannes Hürzeler, known for his contributions to paleoprimatology and who had collaborated with Miquel Crusafont.

The recovered dental remains include 15 teeth of a female individual, which represent much of the permanent dentition and constitute the holotype (type specimen) of this species. They also  include an isolated premolar tooth and, more tentatively, a canine tooth of other individuals. 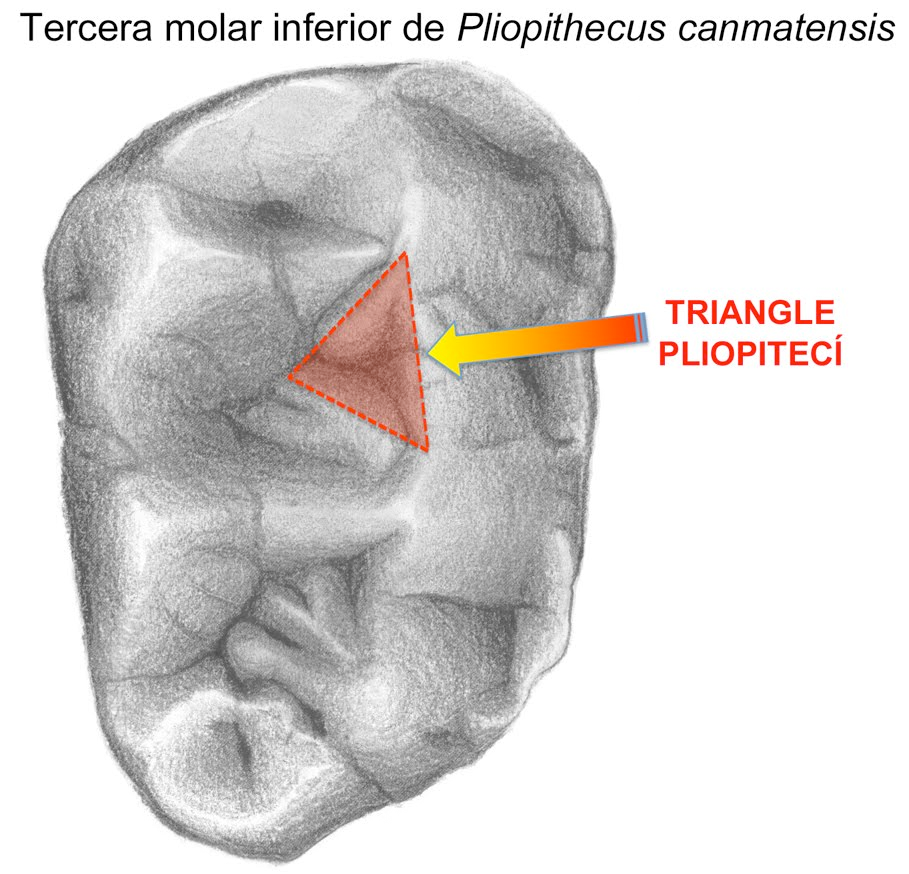 Pliopithecids are a primitive group of catarrhines (also known as apes of the Old World), which apparently originated before the divergence between the monkeys of the Old World (cercopitecoids) and the group of the anthropomorphs and humans (hominoids). Relations between pliopithecids and the rest of catarrhines are still not completely clear, and the same can be said about relations between the diverse genera of pliopithecids. They are characterised by the presence of only two premolars, as other catarrhines, as well as a particular dentary morphology, with some crests of the enamel that constitute the so called "pliopithecine triangle" in the lower molars. Up to now, most of the pliopithecid recovered fossils are, in fact, dental remains.

Pliopithecis are an exclusively Euro Asiatic group, although originated from African ancestors still to be determined. In fact, pliopithecis would be the first catarrhines to disperse from Africa towards Eurasia, where they experienced an evolutionary radiation within an until then continent empty of other apes. After the initial radiation of the group in Asia during the Lower Miocene, pliotihecids have later dispersed to Europe durint the Middle Miocene.

Traditionally, European pliopithecdis have been grouped in two groups, pliopitecins and crouzelins, based on the dentary morphology. However, as explained by ICP researcher David M. Alba, "Barberapithecus shows that crouzelins might not be a natural group, but a kind of hotchpotch that would include several forms not tightly related, but that evolved independently and in different times from pliopithecines ancestors". Rigorous analyses are still to come to discern the relations in this group, but the description of Barberapithecus constitutes a signicative step to this respect.

Pliopithecid remains have been found in various Catalan sites of the Vallès-Penedès Basin. In fact, another article published by ICP researchers in the same issue of the journal documents the discovery of a tooth, which happens to be the oldest fossil remains of this primate group in the Iberian Peninsula. It has been dated as 12 million years old, and has been found in Abocador de Can Mata. 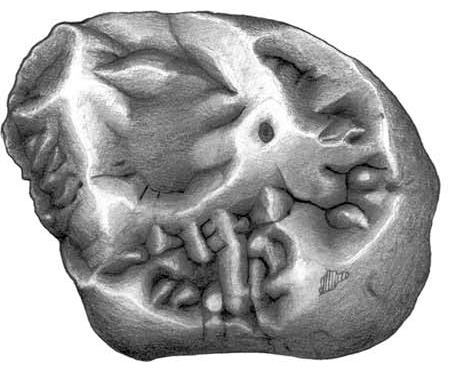 Drawing of a third molar from a pliopithecid recovered in the Abocador de can mata. This remain is currently the oldest of this group in the Iberian Peninsula. Marta Palmero. ICP

Apart from some isolated remains of several sites that could not be attributed to any particular genus, pliopithecids represented in Catalonia also include Pliopithecus canmatensis, in various localities of Abocador de Can Mata, and with a slightly earlier age around 11.5 million years old; and Egarapithecus narcisoi recovered at Torrent de Febulines, near the Catalan city of Terrassa, with an age closer to 9 million years. Both species have been described in the last ten years by the same researchers who have now described  the new genus Barberapithecus. Egarapithecus is the later record of this group, suggesting that the same paleoenvironmental changes that determined the extinction of hominoids, ultimately, also broght  the local disappearance of pliopithecids.

Pliopithecis in Castell de Barberà, from Crusafont to the present

The discovery of pliopithecid remains at Castell de Barberà goes back to the 70s of last century. Miquel Crusafont Pairó, in collaboration with paleontologist Juana Maria Golpe-Posse, preliminary described these remains, together with an isolated tooth recovered at the nearby site of Can Feliu (Sant Quirze del Vallès, Catalonia). Crusafont and Golpe identified the remains as pliopithecids, and even suggested that it was probably a new form, stating that a detailed study of the upper teeth would clarify whether or not the taxon corresponded to a new species. But this study was never published, until recently, when researchers at the ICP Salvador Moya and David M. Alba resumed the study of this material.

The paleontological site of Castell de Barberà is relatively close to Can Llobateres (Sabadell), and although the forner is older, it has not been possible to accurately determine its age. For a long time, it has been assumed that Castell de Barberà dates back over more than 11 million years, comparable to several sites in the Abocador de Can Mata series. However, there are reasons to believe that it might be a little more modern, about 10 million years old, i.e. from the Vallesian.

The importance of this site lies both in the amount of remains provided, showing an entire panoply of mammalian fossils of this age, as well as in the fact that it is one of the few sites around the world recording in the same locality the simultaneous presence of hominoids and pliopithecoids.

The fauna of fossil mammals from Castell de Barberà includes taxa typical of the late Middle Miocene or early Late Miocene, including many artiodactyles, perissodactyles, proboscideans and, in addition to carnivorans and small mammals –such us rodents, insectivores, and others. Among the ariodactyles the presence of the suid (pig) Albanohyus castellensis shoud be highlighted, since is one of the smallest suids ever known, while among the carnivores the false saber-tooth barbourofelid Sansanosmilus jourdani should be mentioned.

Last year, David M. Alba and Salvador Moyà also published a partial humerus of a large hominoid size from this locality, on the bases of classical material excavated by Crusafont and collaborators. We look forward to the new surprises that this site will deliver in the future.

More in this category: « The extinction of Hispanopithecus: just a matter of plants? A chat with Lars van den Hoek Ostende »
back to top