Mongolia and the Altai Mountains: origins of genetic blending between Europeans and Asians 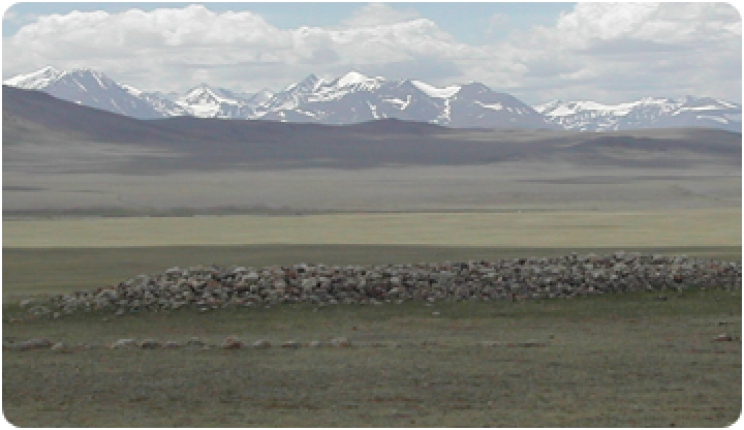 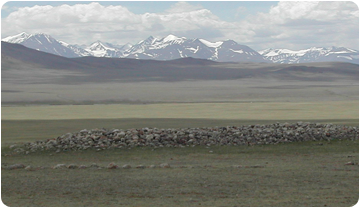 Landscape from the Altai and a Scythian tomb before excavations. Xavier Jordana

A group of researchers led by the Universitat Autònoma de Barcelona (UAB), with the participation of the Institut Català de Paleontologia Miquel Crusafont, has discovered the first scientific evidence of genetic blending between Europeans and Asians in the remains of ancient Scythian warriors living over 2,000 years ago in the Altai region of Mongolia. Contrary to what was believed until now, the results published in PLoS ONE indicate that this blending was not due to an eastward migration of Europeans, but to a demographic expansion of local Central Asian populations, thanks to the technological improvements the Scythian culture brought with them.

The Altai is a mountain range in Central Asia occupying territories of Russia and Kazakhstan to the west and of Mongolia and China to the east. Historically, the Central Asian steppes have been a corridor for Asian and European populations, resulting in the region's large diversity in population today. In ancient times however the Altai Mountains, located in the middle of the steppes, represented an important barrier for the coexistence and mixture of the populations living on each side. And so they lived isolated during millennia: Europeans on the western side and Asians on the eastern side.

The research conducted by researchers from the UAB, the Institut Català de Paleontologia Miquel Crusafont and the Institute of Evolutionary Biology (UPF-CSIC) sheds new light on when and how this Eurasian genetic blending took place.

At the UAB palaeogenetic laboratory researchers analysed mitochondrial DNA (inherited from the mother, it allows us to trace our ancestors) extracted from the bones and teeth of 19 skeletons from the Bronze Age (7th to 10th century BCE) and from the Iron Age (2nd to 7th century BCE) from the Mongolian Altai Mountains. The remains were extracted from the tombs discovered seven years ago, in which the skeletons of Scythian warriors were discovered and which represented the first scientific evidence of this culture in East Asia. 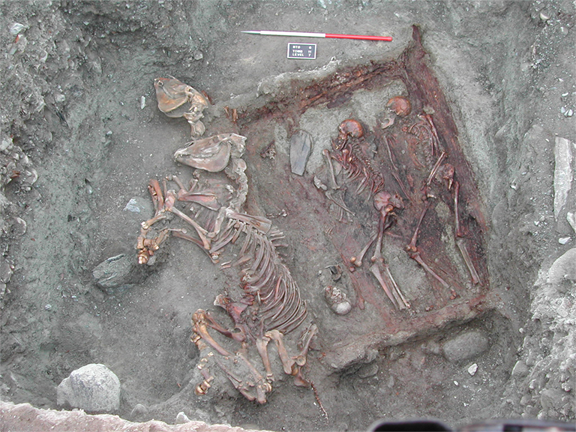 One of the tombs, where a wooden box with two were found with their horses outside. Corpses were buried with their best clothes and weapons (daggers, bronze axes and bow and arrows). They also put sheets of gold around his head and a bowl of food. Xavier Jordana

The results obtained demonstrate that the population from the Iron Age, corresponding to the time when the Scythian culture resided in the Altai Mountains, had a perfect blend (50%) of European and Asian mitochondrial DNA lineages or sequences. The discovery is relevant, taking into account that previous populations showed no signs of lineage mixture: the DNA analysed in the tombs located in Russia and Kazakhstan belong to European lineages, whereas DNA from the eastern part, in Mongolia, contain Asian lineages.

“The results provide exceptionally valuable information about how and when the population diversity found today in Central Asian steppes appeared. They point to the possibility that this occurred in Altai over 2,000 years ago between the local population on both sides of the mountain range, coinciding with the expansion of the Scythian culture, which came from the west”, explains Assumpció Malgosa, professor of Biological Anthropology at UAB and coordinator of the research.

Studies conducted until now on ancient DNA samples from the Altai region already indicated that the Scythians were the first large population to be a mixture between Europeans and Asians. However, the only populations to be studied were those on the western part of the Eurasian steppes, suggesting that this mixture was due to population migrations from Europe to the east.

The current research is the first to offer scientific evidence of this population mixture on the eastern side of the Altai and indicates that the contact between European and Asian lineages occurred before the Iron Age when populations were present on both sides of the mountain. The study suggests that the Asian population adopted the Scythian culture, technologically and socially more advanced, and this made them improve demographically by favouring their expansion and contact with Europeans.

The idea poses a new hypothesis on the origin of today's population diversity in Central Asia and allows for a better understanding of the demographic processes which took place. 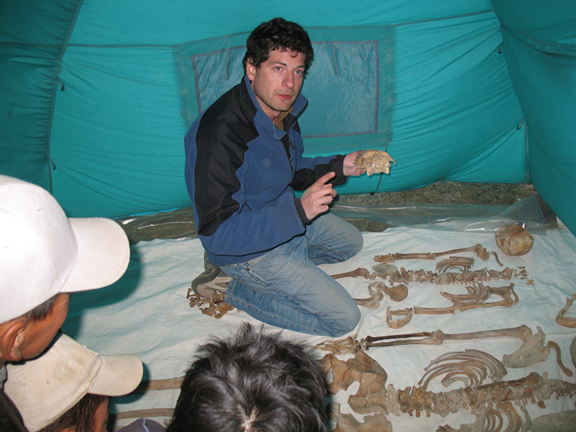 The ICP researcher Xavier Jordana at the store / lab during the excavations, explaining the main findings to the team of the expedition. Xavier Jordana

From 2005 to 2007, UAB researchers worked jointly with French and Mongolian researchers in a European project to excavate Scythian tombs in Mongolia's Altai Mountains. In the three excavation campaigns carried out over twenty tombs were excavated. Many of them were frozen and contained mummified human remains of warriors buried with their possessions and horses. This was the first time Scythian warrior tombs had been discovered in Mongolia, since all other tombs previously found had been located on the western side of Altai.

The Scythians were an Indo-European people dedicated to nomadic pasturing and horse breeding. They crossed the Eurasian steppes from the Caspian Sea until reaching the Altai Mountains during the 2nd and 7th century BCE. The Scythians are known most of all thanks to ancient texts written by the Greek historian Herodotus.

More in this category: « The giant panda lineage: from China to Spain The bovid Tethytragus also in the Vallès-Penedès »
back to top