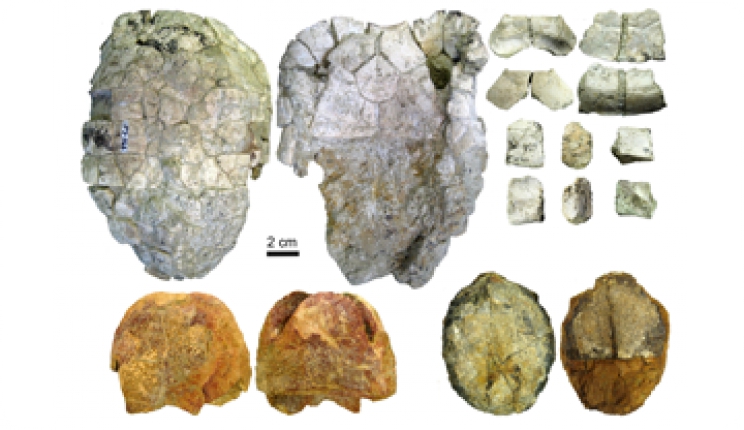 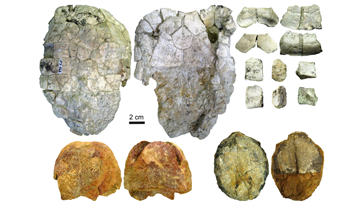 Researchers at the Institut Català de Paleontologia Miquel Crusafont (ICP) have conducted a detailed review of the taxonomy and morphology of the aquatic turtle Ptychogaster (Temnoclemmys) batalleri. This specie has only been identified in Miocene sites in the Vallès-Penedès basin and in the French site of La Grive-St. Alban. The research is published in the journal Comptes Rendus Palevol, showing the intraspecific variability and the peculiarities of its shell and ruling out the validity of the other species described in this area over the last century.

Ptychogaster (Temnoclemmys) batalleri is an extinct specie belonging to the Geoemydidae family, a group that includes 69 extant species of freshwater turtles, which are distributed throughout the world (except Antarctica and Australia). The size of the specimens of this family ranges between 10 and 80 cm, usually with marked sexual dimorphism. Most species in this group are herbivorous, although some omnivorous and carnivorous species have been described. In the fossil record, geoemydids are frequently found in Europe during Tertiary, being the ptychogasterids one of the least studied groups among them.

From a taxonomic point of view, the specie Ptychogaster (Temnoclemmys) batalleri has a rather convoluted history. The Catalan paleontologist Josep Ramon Bataller recovered the first fossil specimens in 1926 from the subsoil of the city of Terrassa (Barcelona). Initially, it was named as Emys egarensis, referring to the name of the site where it was found but, in 1931, French paleontologist Frédéric-Marie Bergounioux, renamed it as Clemmys batalleri in recognition to Bataller.

But this would not be its final name. Bergounioux realized that this specie showed some morphological peculiarities, as a pair of spikes in the plastron (the ventral side of a turtle shell) and the ability of this animal to partially close its shell tightly to escape predators. This led Bergounioux to created the genus Temnoclemmys in 1958, where he included the specie found by Bataller and three other species from the Vallès-Penedès Basin: Temnoclemmys vallesensis and T. cordate (both from Viladecavalls), and T. elongata, found in Hostalets of Pierola.

Box turtles as Terrapene ornata can close its shell when in danger. NeilDazet. http://www.projectnoah.org/

But the story of the nomenclature of this turtle does not end here. Years later, some authors considered that this genus and the species included were not taxonomically valid, whereas other paleontologists included this species within the genus Ptychogaster. Thus, this specie was renamed as Ptychogaster (Temnoclemmys) batalleri. Other authors considered that Temnoclemmys would be neotenic (and, hence, a pedomorphic or juvenilized form) compared to Ptychogaster s.s. due to its small shell size.

Putting the turtle into its proper (taxonomic) place

In this article published in Comptes Rendus Palevol by Àngel Hernandez Luján and other researchers at the ICP, the subgenus Ptychogaster (Temnoclemmys) is revised and its main features (such as a very thick, concave and trapezoidal epiplastral lip in the anterior plastral lobe) are described. At the same time, the article identifies Ptychogaster (Temnoclemmys) batalleri as the only valid specie of the Vallès-Penedès, putting under this name the three species described by Bergounioux and also "Testudo" celonica found in Sant Celoni. 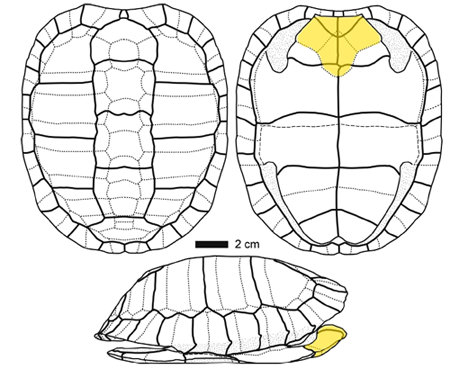 In turn, the study expands the stratigraphic range of this specie, which was already present in the Middle Miocene. It also rules out the possibility of P. (T) batalleri being a juvenilized form, since, as in extant turtles, some aspects such as the size of the shell are related to differences between males and females. The article also describes the first record from this basin of other species of the Ptychogasteridae family:  Ptychogaster (Ptychogaster) sp during Early, Middle (and probably Late) Miocene and Ptychogaster (Temnoclemmys) sp, during Early Miocene.

This article shows the importance of taking into account the morphological variability when describing new species. "Turtles are no exception, especially when we only have fossils. Moreover, to establish the phylogenetic relationships we should not only take into account the morphological but also molecular studies," says the researcher Àngel Luján.

More in this category: « A mobile kneecap for Pau A strange couple: Mesopithecus and fossil macaques in the Late Miocene »
back to top