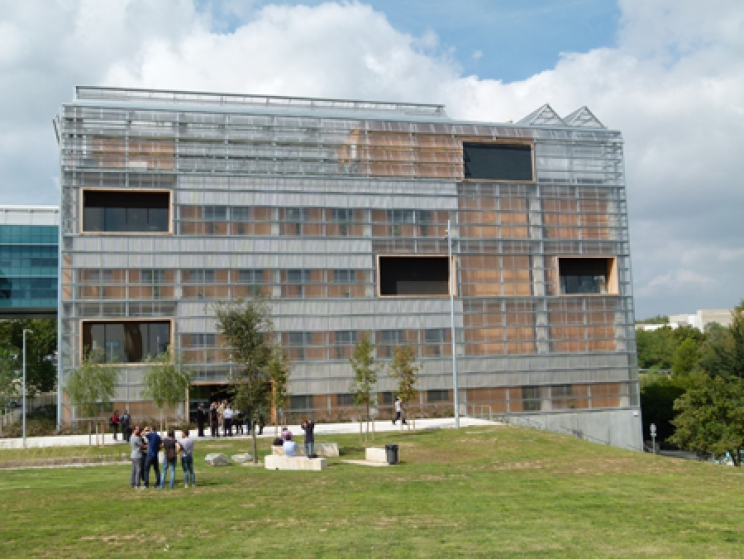 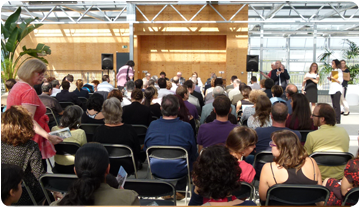 The new main offices of the Institute of Environmental Science and Technology and the Institut Català de Paleontologia Miquel Crusafont were inaugurated today at the Universitat Autònoma de Barcelona. The new building, unique in Catalonia thanks to the sustainability criteria with which it was constructed, controls its temperature through a bioclimatic “outer skin”, reducing energy consumption levels up to 62% and water consumption up to 90% in comparison to conventional buildings.

More than 150 people attended today to the inauguration of the new headquarters of ICP and UAB. In his speech, Salvador Moya, director of the ICP, has highlighted the importance of these new facilities to keep on doing high-level research and has announced that the Catalan Institute of Palaeontology Miquel Crusafont is now officially a university research center in the UAB. "This fact opens a new and decisive stage in the center prospects: our final integration in the Catalan university system, one of the strategic objectives we had set from the beginning of the project," he said. 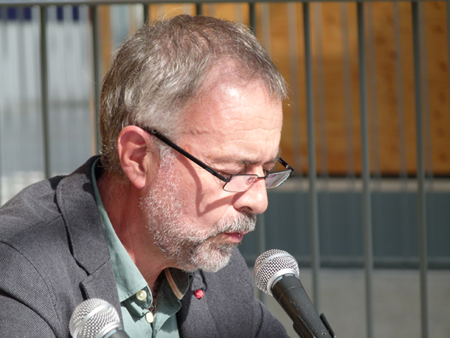 Located at the southern entrance to the UAB campus, the building has a surface area of 9,400 square metresdistributed on 6 floors, four of which are equipped with offices, laboratories and common areas, one with a car park and another with several storage areas, including a large warehouse with fossils and a greenhouse. The construction cost 8 million euros and was co-financed by European funds for regional development projects (2007-2013 FEDER programme of Catalonia) and the Spanish Ministry of Economy and Competitiveness.

The new offices for ICTA and ICP were designed with the highest possible criteria of sustainability by two architecture groups, dataAE and H Arquitectes. The objective was clearly focused on sustainability regarding water and energy consumption, as well as the building materials used. The building achieved a LEED GOLD certification by the US Green Building Council, with a score of 73 points. The certification is based on international standards and awarded to those with a strong commitment to the environment.

Heat in the Winter and Cooling in the Summer

The building consists mainly of offices and laboratories which, given their activities, tend to generate heat. The building's design aims to make use of this heat in the winter and disperse it during the summer through natural ventilation. Four inner courtyards make up a large central atrium which guarantees an optimal quality of natural light for all the plants. A concrete structure with high thermal inertia works directly together with the passive comfort systems of the building.

The outer façade of the building contains a “bioclimatic skin”, a system comparable to a greenhouse which regulates the storage of solar radiation and ventilation through a series of automatic openings and closings. Its outer skin opens and closes automatically depending on the temperature, humidity, wind or sunlight, in order to offer the best bioclimatic conditions inside the building at all times.  Thus, an intermediate area with temperatures between 16 and 30ºC is created, and this acts as a thermal cushion which helps to maintain a temperature of comfort in the working areas. At the same time, it reduces energy demands and improves temperatures inside in a completely natural way.  These areas are equipped with the most adequate plants for each space, and therefore favour the presence of nature inside the building, while helping to regulate humidity. 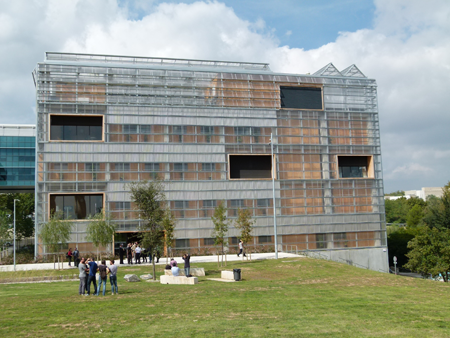 The building ressembles a greenhouse

The building's control system has been programmed so that the bioclimatic skin, office windows, and all active climate controls work in coordination to prioritise a passive performance system and minimise the use of non-renewable energies. A complex automated computer control system processes and manages data to ensure the best levels of comfort and energy usage. The building makes use of all contact existing between its two underground stories and the earth as a preliminary stage for the building's air renovation, through geothermal systems which take advantage of underground temperatures. It will also give support to the passive systems at specific times, thanks to a cooling machine with high efficiency magnetic levitation compressors. Thanks to these elements, the building was certified as being in the A category of energy efficiency, with up to 62% less consumption than what is needed to run a conventional building of similar dimensions.

A 90% Reduction in Water Consumption

The building takes into account the full cycle of water usage in order to optimise consumption needs based on the reuse of rainwater and white, grey and black waters. By doing so, there is a 90% reduction in the water consumption needed for a conventional building of similar dimensions. Highly efficient elements have been installed, such as dry urinals, low-capacity toilets, tap aerators and sensors, and water-wise landscaping. Rainwater is gathered from the roof of the building, the cemented areas and the adjoining building: one part will be for irrigation and the rest will be filtered and disinfected, and later used for dishwashers and toilets. Grey waters will be regenerated and used for flushing. Wastewater will be treated through phyto-purification and the solid part will be used as compost.

Reduction in the Environmental Impact of Construction Materials

With the aim of reducing the amount of construction materials used, no false ceilings or technical floors were installed, and constructive solutions and materials with lower ecological baggage were put to use, thereby lowering energy consumption and emissions both when constructing the building and producing waste. Materials were chosen with mineral structures containing high thermal inertia and a long useful life, combined with materials of low environmental impact. Importance was given to organic or recycled materials and reversible and reusable dry construction systems. The earth dug up was later used around the building, thus making use of the area's resources.

More in this category: « Castell de Barberà: an exceptional paleontological site of uncertain age A specialized diet led to extinction European hominoids »
back to top