Thesis defenses in times of pandemic: Joan Femenias and his PhD work on the Eocene primate Agerinia 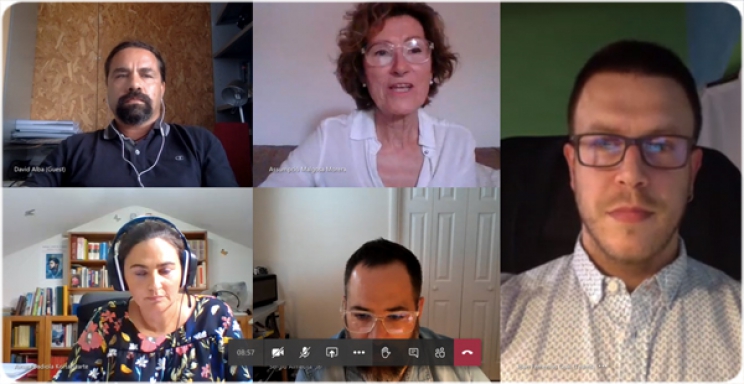 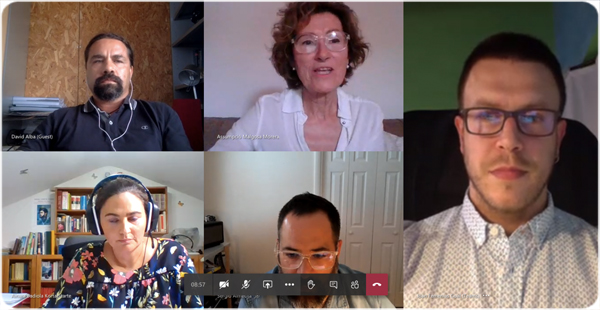 Joan Femenias, researcher at the Paleoprimatology and Paleoanthropology Group of the Institut Català de Paleontologia Miquel Crusafont (ICP), defended his doctoral PhD thesis on this small 50-million-years-old primate of about. The analyzed fossil remains were obtained from the ICP collections as well as from prospecting and sampling campaigns in the South-Pyrenean and Ebro basins. The court has awarded him with the highest score to his work, which has been directed by Raef Minwer-Barakat (University of Granada) and Salvador Moyà-Solà (ICP).

The information about the early Eocene primates from Europe is nowadays very scarce, especially regarding the Iberian Peninsula. In order to contribute to the knowledge of the first primates of this area, this thesis delve into the study of one of the scarce known taxa from this period, the genus Agerinia. The study of this genus has included, on the one hand, the revision of the material previously assigned to Agerinia and the study of the unpublished material of this genus stored at the collections of the Institut Català de Paleontologia Miquel Crusafont (Sabadell, Barcelona). On the other hand, several field campaigns have been developed in the lower Eocene continental deposits from different Catalan basins, and the material found in these interventions has been studied in detail.

More specifically, the study of the unpublished material of Agerinia roselli from Les Saleres, together with the revision of the already published remains of this species, has allowed emending its diagnosis. This study has demonstrated the presence of several traits undescribed until now, and has consolidated the distinction between this genus and other Euroasiatic adapiforms. Besides, the study of the dental material of Agerinia from the locality of Masia de l’Hereuet has led to the erection of the species Agerinia marandati. The definition of this new taxon has allowed the description for the first time of the dP4, dP4, M1, M2 and M3 of the genus, and has confirmed that it has unfused hemimandibles. The revision of the material from several localities previously assigned to the genus Agerinia has resulted in the change of some taxonomic determinations that were inadequate. In addition, Agerinia has been confirmed as the only euprimate identified during the early Eocene in the northeastern Iberian Peninsula, because the mentions to the genus Cantius from some localities of this area do not seem enough substantiated.

The prospection and sampling of the lower Eocene continental deposits carried out in the Southern Pyrenean and Ebro basins have led to the discovery of eleven localities with vertebrate remains, six of them providing fossils assigned to the genus Agerinia. The study of the material from Casa Retjo-1 has resulted in the definition of the new species Agerinia smithorum and has allowed the first description of the P2, P2, P3 and P4 for the genus Agerinia. Besides, the remains recovered from Casa Retjo-3 and Cabana del Llúcio-1, very similar to those from Casa Retjo-1, have been also assigned to Agerinia smithorum, and have allowed the first description for the genus of the I1, I2 and P1. On the contrary, the scarcity of the remains found in the levels of Font del Torricó-1 and 3 has only allowed their determination at the generic level, being therefore assigned to Agerinia sp.

The morphological differences between the studied species have been interpreted as evolutionary changes in a lineage consisting of A. smithorum – A. marandati – A. roselli. These changes include, among others, the reduction and buccal displacement of the P1, the reduction of the number of roots of the P2, the progressive molarization of the P4, the closure of the trigonid of the M1, the reduction of the paraconid of the M1 and M2, the development of the hypocone, paraconule and metaconule, and the increase of the enamel crenulation of the M1 and M2. This hypothesis is supported by the relative stratigraphical position of the localities where the remains of each species have been recovered.

Two important biological traits of Agerinia have been inferred on the basis of the studies here presented: the locomotor behaviour and the body mass. The study of the calcanei of A. smithorum recovered from Casa Retjo-1 and Cabana del Llúcio-1 has allowed the interpretation of this species as a moderately active arboreal quadruped capable of leaping, although not specialized for vertical climbing or leaping. On the other hand, the estimated body mass is very similar for the three species of Agerinia and varies between 500 and 900 g, approximately.

Finally, several phylogenetic analyses have been performed, which in all cases have nested the three species of Agerinia in a single clade, placing A. smithorum as the most primitive, thus supporting the hypothesis of the lineage integrated by A. smithorum – A. marandati – A. roselli. The results of these analyses nest the sivaladapids Hoanghonius and Rencunius as the sister clade of Agerinia, but does not resolve the relations between these genera and several groups of European adapiforms, thus bringing into question the monophyletic origin of the cercamonids (or cercamoniines) and of the adapiforms.

More in this category: « Delving deeper into the evolution of the Triceratops frill A stolen fossil leads to the description of a new crocodile species in the Pyrenees »
back to top