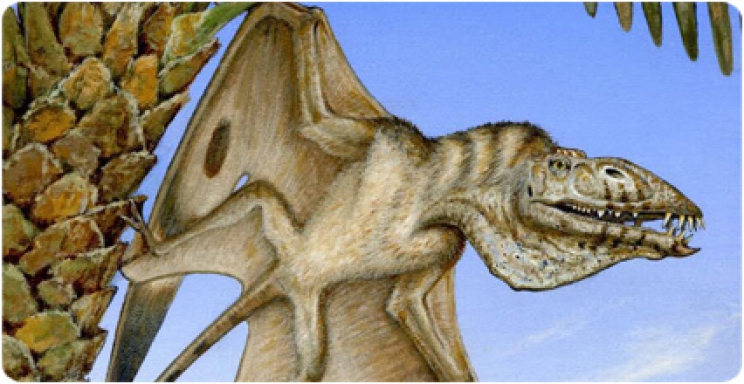 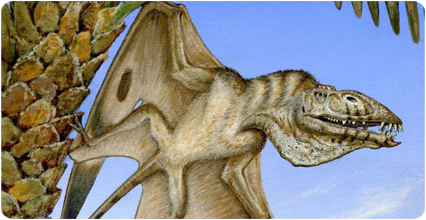 An international team of paleontologists including Fabio M. Dalla Vecchia, associated researcher at the Institut Català de Paleontologia Miquel Crusafont (ICP) and a renowned pterosaur specialists, have described the over 200-million-year-old new species Caelestiventus hanseni. Triassic pterosaurs remains are extremely rare and mostly flattened by crushing but the fossils recovered in Utah are preserved in three dimensions and include most of the skull and a wing phalanx.

When Brooks Britt, a geological sciences professor at Brigham Young University (BYU, in Utah, USA), searched through the latest Triassic sandstone samples in his lab, he expected to find bones of early crocodiles and dinosaurs. Instead, he discovered the bones of a new pterosaur specimen, now named Caelestiventus (“heavenly wind”) hanseni. Dating back more than 200 million years, it’s one of the earliest ever found. Pterosaurs are extinct reptiles that ranged from the Late Triassic to the Late Cretaceous (around 215− 66 million years ago).

Triassic pterosaurs are extraordinarily rare and all but one specimen come from marine deposits in the Alps. Until this discovery, newly published in the journal Nature Ecology and Evolution, there were only 30 known Triassic pterosaur specimens known to humans — and none lived in deserts. Caelestiventus hanseni predates all desert pterosaurs by 65 million years. “We’re getting insights into the beginning of pterosaurs,” Britt said. “Ours shows that they're extraordinarily diverse, living in coastal marine, insular, fluvial and even desertic environments."

Paleontologists were digging at the Saints and Sinners Quarry, in northeastern Utah, when they made the discovery. With so many bones at the site (more than 18,000 so far), the team extracts large blocks of sandstone blindly, not knowing what bones are in the blocks until they are carefully whittled down in the lab. Back in Provo, the team found five skeletons of early crocodiles in one block before noticing there were several odd-looking bones as well. Those turned out to belong to the new pterosaur, which was unexpected, Britt said. With their delicate build, pterosaur bones are easily destroyed, making them rare in the fossil record. “Most pterosaur skeletons look like roadkill,” Britt explained.

The bones of Caelestiventus hanseni, however, are uncrushed and three-dimensional because they are preserved in sand, which was not compressed. “Triassic specimens sometimes consist of just a single bone: for example, a wing phalanx” Britt said. “For this animal, we have the sides of the face and the complete roof of the skull, including the dorsal impression of the brain, complete lower jaws and a wing phalanx.” This species was comparatively large for the standards of Triassic pterosaurs, with a wing span over 150 cm.

The bones of Caelestiventus hanseni – especially the skull – provide unique insights into the evolution of the earliest pterosaurs.  These insights include the fine details of the skull and mandibular bones and the presence of a flange along the mandible for the probable attachment of a gular pouch like that of living pelicans or frigatebirds. Furthermore, the skull roof preserves the impression of the brain, which reveals that even early pterosaurs had a poor sense of smell and well-developed vision like later species.

Fabio M. Dalla Vecchia, a Triassic pterosaur expert associated with the Institut Català de Paleontologia Miquel Crusafont played a key role in this research. “When we first contacted [him] and said, ‘Hey, we've got a three-dimensional pterosaur out here in Utah,’ he goes, ‘No, no, no ... I don't buy that.’ Then we sent him some three-dimensional images of the bones and it convinced him. Next thing you know, Fabio's at BYU, working with us on this specimen,” Britt explained. “At the beginning I was skeptical because many purported Triassic pterosaurs had been reported in the past from USA, but none of them was unequivocally a pterosaur specimen. However, when I saw the maxillojugal and the wing phalanx from Utah I had no doubts: it was the first unequivocal Triassic pterosaur from USA,” says Dalla Vecchia.

Caelestiventus hanseni is most closely related to Dimorphodon macronyx, known only from Lower Jurassic strata of Britain.  This indicates that the Dimorphodontidae originated in the latest Triassic and the lineage survived the Triassic-Jurassic mass extinction event. Pterosaurs were the first creatures after insects to evolve into powered flight—meaning they were able to flap their wings to generate lift rather than simply leap or glide.

More in this category: « Shedding light on the development of baby duck-billed dinosaurs The role of toes in the emergence of bipedalism »
back to top