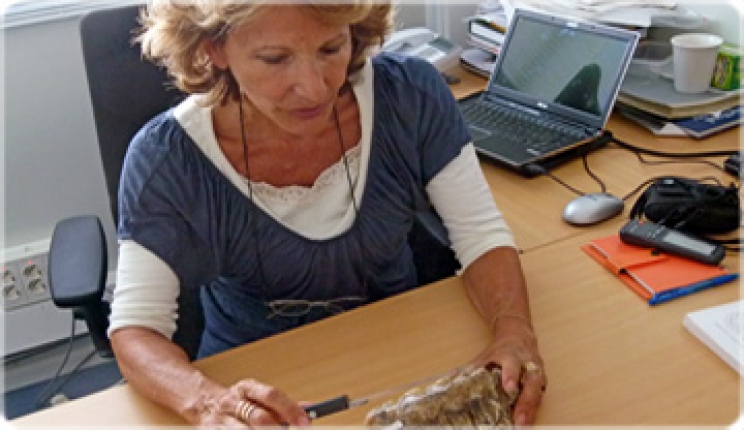 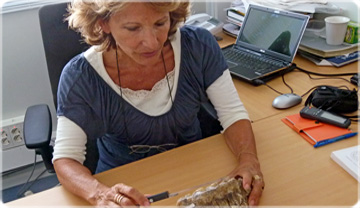 The ICP was pleased to receive the visit of Maria Rita Palombo, a researcher at the Centro di Studio per il e l'Evoluzione Ambientalequaternary of di La Sapienza University in Rome and professor at the same institution. During the week she spent at our center shared talks with our researchers, especially with Joan Madurell and Meike Köhler who collaborates in research on Vallparadís deposits and island systems.

Rita, one of the reasons for your visit was to work with Joan Madurell. As we know you are studying some elephants from Vallparadís. Can you tell us more about the project?

Indeed.  The site of Vallparadís is extraordinarily rich in fossils of small and large mammals but not in reference to elephants. That makes the material difficult to analyze because there are not many samples and they also have a high degree of variability. The truth is that I hadn’t time to reflect on the results of this research, there are still some things to understand. So I prefer to be cautious, but don’t worry we will soon have results that you can explain.

We look forward to your results. Tell us something more about the collaboration with Meike. I think you have been studying some fossils of the Balearic Islands. Does this have anything to do with your work on pygmy elephants in Sicily?

Yes, the evolution of mammals on islands is one of the most interesting paleontological topics. A typical field where paleontology meet biology. I've been working with fossils from islands for more than 40 years. I had previously collaborated with Meike Köhler and Salvador Moya analyzing the evolution of the brain of deer on the island of Crete and comparing with Myotragus (extinct dwarf goat endemic to the Balearic Islands). Now we back to work together on paleohistory studies trying to understand if the pattern of evolution of large mammals, such as proboscideans, is equal in different islands.

Then your story with the ICP is already long. How did it start?
I met Salvador 30 years ago and since then we exchanged information, data and opinions. And 5 years ago I was invited from to participate in a research project on development in the Balearic Islands with Meike Köhler. We could say that the collaboration "official" with the institute began with Meike, but the professional relationship and friendship with the CPI comes from many years ago.

And how you see the ICP after so many years?
In my opinion the quality of the institution has increased significantly, especially in recent years. The research team has a very high level and I noticed that there are more young people. I think the work they do is very interesting.

You know very well Italy and now the sites of Catalonia. Could you tell us which sites would you consider most important? What about the differences between Italy and Catalonia?

The big difference between Italy and Spain in general is that rich deposits are rarely to found in Italia. The best records we have found are limited in time and is difficult to successive samples of fauna, which limits our understanding of evolution.
While in Italy we have to understand evolution as a puzzle, combining animals from different places, in Spain we can follow the evolution of wildlife in one place.
In reservoirs like those in Catalonia or the rest of Spain (Vallparadís Atapuerca, Incarcal) is possible to analyze the evolution of the fauna, especially in a very interesting period. Between 1.3 and 600.000 millions years, during the European Pleistocene, when climatic changes were dramatic. This is what is known as the Mid-Pleistocene Revolution. With these fields we know more about the sequence of evolution of large and small mammals.

Back to Italy. Can you tell us any details about work at the University La Sapienza of Rome?

Well I could tell you a lot! I've been working at the university for over 40 years. I started with a scholarship in August 1971, looking at wildlife in general, and soon came my first work on Palaeoloxodon falconeri (pygmy elephants) in Sicily. So I still somehow linked to the same survey 40 years ago. But in these years I have done many other works on very diverse fauna of Italy.

As for my current research, I am also 20 years focused on the paleobiology and paleoecology, in understanding the environmental context in which lived the different taxa that I’ve been studying. I try to understand the relationship between climate change and changes in the fauna, trying to establish the different dynamics between geographically close sites in the Mediterranean area. In this regard I have worked with various mammals, including homo.

And could you anticipate us your next steps in research?

I am going to follow in these two lines of research: island systems and paleobiology. And now I am collaborating on a project with an American colleague related to the dynamics and evolution on islands compared extinct fauna with present fauna. Also collaborating on this project Greek and Dutch colleagues.  On the other hand I would like to discuss continental fauna during the Mid-Pleistocene Revolution and will continue comparing Spain, France, Italy and Greece trying to understand which is the impact of climate change and also what happened to the first humans in Europe at that time.

Thank you very much Rita. I hope we see you soon again by the ICP.

This interview has been edited by Carolina D'Amico Ongaro, student in the master's degree in Scientific, Medical and Environmetal Communication, from UPF

More in this category: « The riddle of the giant birds on the island of Lanzarote Dinosaurs of Eastern Iberia, a vivid introduction to dinosaurs of Spain »
back to top