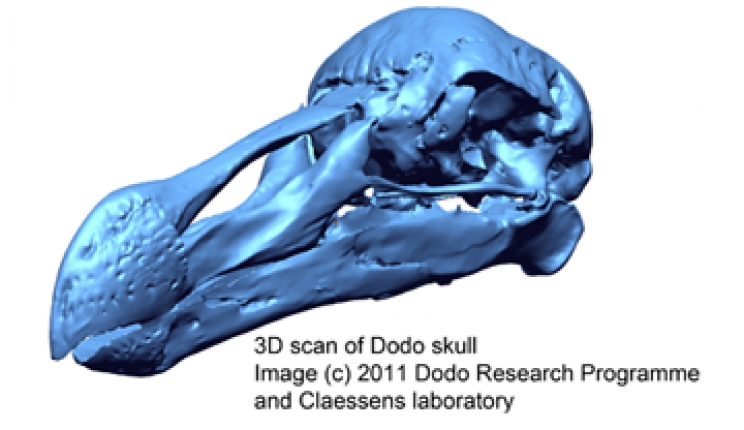 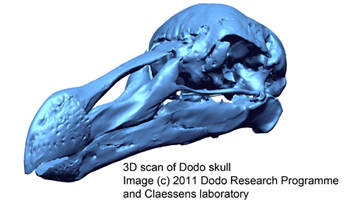 3D model of the skull of dodo

Images generated by a laser scan have provided a new insight to the anatomy of this huge flightless bird, considered to have gone extinct in 1693 due to the arrival of humans to Mauritius. Hanneke Meijer, a postdoctoral researcher at the ICP, presented the results of this project at the annual meeting of the Society of Vertebrate Paleontology (SVP) held last week in Berlin.

Despite its prominence in popular culture, surprisingly little is known of the anatomy and biology of the dodo (Raphus cucullatus). In this study, researchers built a 3D model of the only complete known skeleton of an individual bird ofthis species using a laser scan, a technique that provides detailed 3D images of the bones without damaging them. The scanned specimen was found in 1903 and is held by the Museum of Natural History in Port Louis, Mauritius. Researchers also scanned a second, partially composite skeleton from the Museum of Natural Sciences in Durban, South Africa.

Once they analyzed the images, the researchers noticed that some bones had never been studied before in this species, such as the kneecap. Researchers attribute this little knowledge of this animal to the fact that when this species disappeared in 1693, scientists were not fully aware of the concept of extinction, and to the lack of interest in studying the biology of this bird. 3D scans will also allow scientists to perform simulations of how this great animal moved when alive.

The dodo was a huge bird (up to one meter tall and about 18 kilograms) belonging to the Columbidae family that, surprisingly, includes much smaller birds such as extant pigeons and doves. "The skull of the dodo is so large and its beak so robust, that it is easy to understand that the earliest naturalists thought it was related to vultures and other birds of prey, rather than the pigeon family”, says Hanneke Meijer, a researcher at the Institut Català de Paleontologia Miquel Crusafont, who has participated in the project. 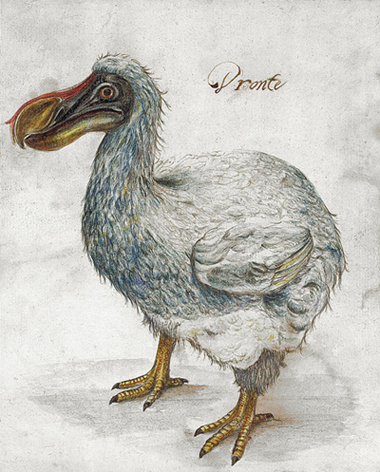 A drawing of a dodo. 17th Century (Wikimedia commons)

The ancestors of the dodo arrived to Mauritius about 8 million years ago. Species on islands often evolve in a different way than they do on the continent and, in the case of the dodo, this species lost the ability to fly probably due to the absence of predation. The history of the dodo is an example of the disruptive effect of humans on ecosystems: it was discovered in 1598 in Mauritius and was extinguished in less than a century. It’s thought that it became easy prey for pigs and rats that sailors introduced to the island.

More in this category: Castell de Barberà: an exceptional paleontological site of uncertain age »
back to top