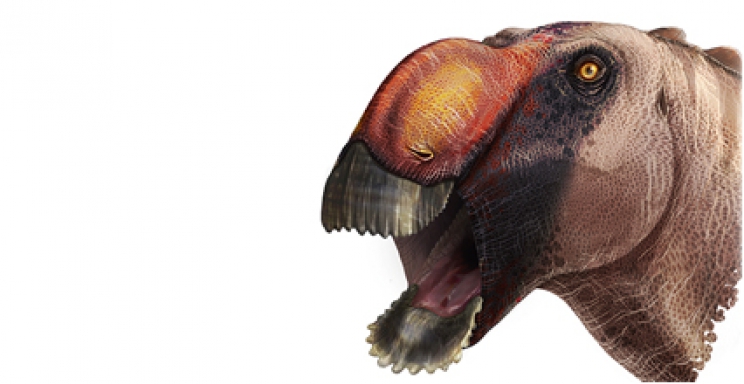 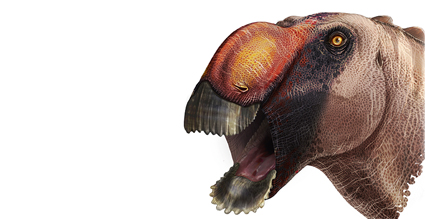 The new genus and species Aquilarhinus palimentus, or ‘shovel-chinned eagle nose’, is a primitive duck-billed dinosaur that lived 80 million years ago. This dinosaur has been named for its aquiline nose and wide lower jaw, shaped like two trowels laid side by side. The skull is very complete and was found in the Big Bend National Park (Texas, US) in the 80s. The research has been published in the Journal of Systematic Palaeontology.

In the 1980s, Texas Tech University Professor Tom Lehman (then a Master's student) was conducting research on rock layers at Rattle Snake Mountain and discovered badly-weathered bones. He and two others from the University of Texas at Austin collected them, but some were stuck together making them impossible to study. Research in the 1990s revealed an arched nasal crest thought to be distinctive of the hadrosaurid Gryposaurus. At the same time, the peculiar lower jaw was recognized. However, the specimen spent additional years waiting for a full description and it was not until recent analysis that the researchers came to realize that the specimen was more primitive than Gryposaurus and the two major groups of duck-billed dinosaurs.

“This new animal is one of the more primitive hadrosaurids known and can therefore help us to understand how and why the ornamentation on their heads evolved, as well as where the group initially evolved and migrated from,” says lead author Dr Albert Prieto-Márquez from the Institut Català de Paleontologia Miquel Crusafont, near Barcelona. “Its existence adds another piece of evidence to the growing hypothesis, still up in the air, that the group began in the southeastern area of the US.” 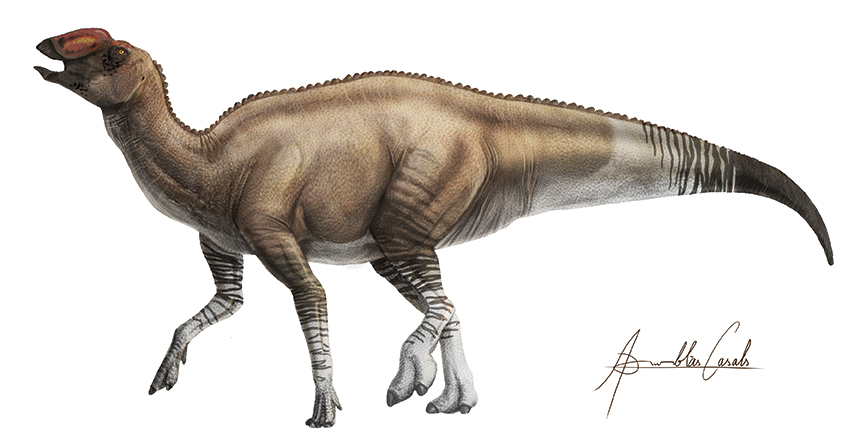 Duck-billed dinosaurs, also known as hadrosaurids, were the most common herbivorous dinosaurs at the end of the Mesozoic Era, and all had a similar-looking snout. The front of the jaws meet in a U-shape to support a cupped beak used for cropping plants. The beak of some species is broader than in others, but there was no evidence of a significantly different shape and therefore likely also different feeding style in duckbills until Aquilarhinus was discovered. The lower jaws of Aquilarhinus meet in a peculiar W-shape, creating a wide, flattened scoop.

Around 80 million years ago, this particular dinosaur would have been shovelling through loose, wet sediment to scoop loosely-rooted aquatic plants from the tidal marshes of an ancient delta, where today lies the Chihuahuan desert. When the dinosaur died, some of its bones were transported downstream by the tide and became lodged in vegetation. The twice-daily flow of the tide dropped silt that built up the bank of the channel around its body, fossilising the bones in thick ironstone.

The dentary of Aquilarhinus, showing the unusual upturned end of the mandible.
Material housed at the Texas Vertebrate Paleontology Collections at The University of Texas at Austin (Albert Prieto-Marquez / Institut Català de Paleontologia Miquel Crusafont)

The jaw and other characteristics of the specimen show that it does not fit with the main group of duck-billed dinosaurs known as Saurolophidae. It is more primitive than this group, suggesting there might have been a greater number of lineages than previously recognised that evolved before the great radiation that gave rise to the bewildering array of unadorned, solid and hollow-crested forms. Most saurolophids had bony cranial crests of many different shapes and sizes. Aquilarhinus also sported a bony crest, albeit a simple one shaped like a humped nose. The discovery of a solid crest outside the major radiation of hadrosaurids supports the hypothesis that all crests derived from a common ancestor that had a simple humped nose.

More in this category: « Iberodactylus, the biggest pterosaur discovered in the Iberian Peninsula The life history of Miocene equids subject of a new doctoral dissertation at the ICP »
back to top