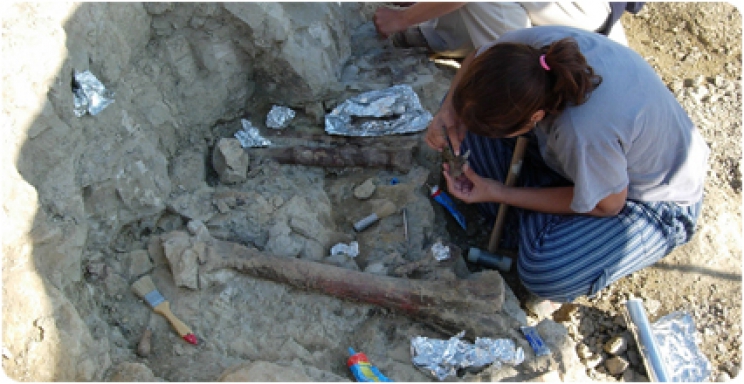 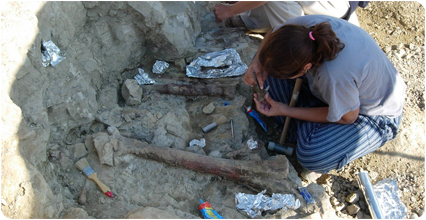 The Basturs Poble site (Pallars Jussà, Lleida) is the most important site in Europe when it comes to hadrosaur remains. The site has yielded over 1000 fossils, all probably pertaining to the same species. Now, the journal PLOS ONE publishes the most complete study of fossils recovered from the site of Basturs Poble and reveals the presence of many young individuals. Palaeontologists from the Institut Català de Paleontologia Miquel Crusafont (ICP), the Universitat Autònoma de Barcelona (UAB) and the Museum of Conca Dellà (MCD) participated in the study.

The Basturs Poble site is what is known in English as a bone bed, a geological stratum containing a great amount of fossils. The stratum dates back some 70 million years.  It is the only one to have been found in Europe exclusively containing hadrosaur remains. The excavations conducted during the past ten years have yielded approximately one thousand fossils. The remains are disjointed and possibly belong to only one species: the Pararhabdodon isonensis. “We think the individuals died due to unfavourable environmental conditions, perhaps an extreme dry spell. After their death, the remains got washed away by water and then began to fossilise, but we know that the place where they died was not far away from the site”, explains Víctor Fondevilla, researcher at the Institut Català de Paleontologia Miquel Crusafont (ICP) and the Universitat Autònoma de Barcelona (UAB) and first author of the paper.

The research recently published in PLOS ONE analysed the 270 fossil remains at the site which were prepared to be studied, including skulls, jaws, teeth, vertebrae and limb bones. Researchers however did not have enough with describing and measuring each specimen, they also analysed the interior of the fossils to extract information on the age of each individual.   “We can cut open the fossils and analyse their inner structure. It gives us a lot of information on the vital cycle of each of the animals", says ICREA research lecturer at ICP Meike Köhler. Similar to the rings of trees, in sections of elongated bones we find lines of arrested growth (LAGs) which are indicators corresponding to the alternation between favourable and unfavourable periods. In this way we can calculate at what age they died. 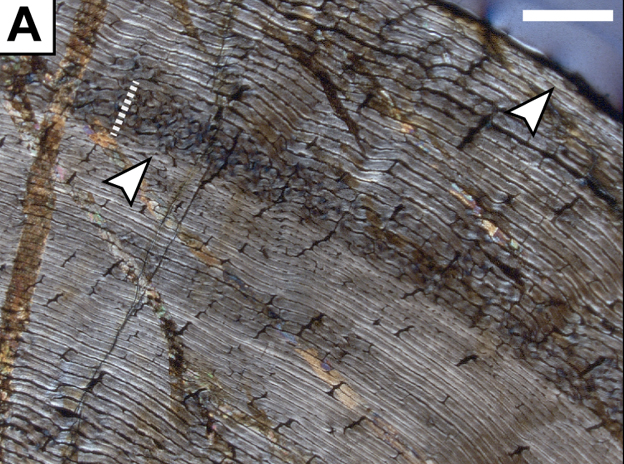 Using this system, palaeontologists detected that at the site were a large number of young individuals and, to a lesser extent, sub-adults and adults. But no recently hatched dinosaur fossils were found. “We estimated that the youngest individuals died at two years of age and that the adults were 14 to 15”, Fondevilla explains. The fact that researchers found so many young samples makes them think that the accumulation of bones at Basturs Poble represents a natural population of herbivores, where young individuals are more abundant. “It may also be that the abundance of young remains is due to these individuals being more vulnerable to crises and therefore dying in larger quantities than adults would”, the main researcher of the study comments.

Also participating in the study were researchers from the Museum of Conca Dellà and the Friulian Museum of Natural History in Udine, Italy.

Hadrosaurs, a well-known group in Catalonia

Hadrosaurs, also known as "duck-billed" dinosaurs, are a group of ornithischian herbivorous dinosaurs which lived in the Late Cretaceous period. This is probably the most well-known group of dinosaurs. Among the subfamilies there are the lambeosaurines, which can be found in Catalonia's sites. They characteristically had a robust medium to large-sized body (weighing one kilogramme when hatching and reaching up to 3000 kilogrammes as adults), with smaller front limbs and larger hind limbs. This last trait made it possible for them to walk on two or four feet indifferently.

The skull is long and duck-billed shaped, and the jaw holds rows of stacked teeth. Their most distinctive characteristic was their cranial crest, formed by several more or less developed cranial bones. What the crest was used for remains unclear, but scientists believe it could have acted as a resonating chamber with which to amplify sounds and facilitate recognising members of the same species. Other hypotheses point to the possibility of only males having crests which aimed to attract the females.

The Pararhabdodon isonensis species is only known to have existed in the Pallars Jussà region. The species was described in 1985 after the discovery of remains found at Sant Romà d’Abella and its specific name - isonensis - refers to the town of Isona located near the site. These dinosaurs measured from 6 to 7 metres in length and it is estimated that the adults weighed some three tonnes.

The Pyrenees, home to the last dinosaurs in Europe

Catalonia is very rich in fossiliferous sediment. Of the most relevant are the pre-Pyrennean basins, which conserve remains of different life forms from the Late Cretaceous Period (between 70 and 66 million years ago). In geological terms, that is very shortly before the great extinction which marked the end of many life forms, including non-avian dinosaurs. Located at the Pyrennean sites, therefore, are the last dinosaurs to have lived in Europe, a few hundreds of years before they disappeared from the world entirely.

The Basturs Poble site was located by scientific communicator Marc Boada in August 2001. Upon discovering fossils on the surface, he contacted palaeontologists from the Museum of Conca Dellà.   Few months later a palaeontology dig was conducted which confirmed the exceptional nature of this site. After a first research dig, twelve more campaigns have been conducted as part of research projects led by Àngel Galobart, Head of the Mesozoic Fauna Research Group at ICP, and Rodrigo Gaete from the Museum of Conca Dellà.

The fossils found at Basturs Poble are conserved at the Museum of Conca Dellà. The museum's dinosaur exhibition hall contains a sample of the most outstanding bones found at the site and a life-size recreation of a Pararhabdodon isonensis dinosaur.

More in this category: « When squirrels conquered the sky From island to island: the trip of the giant rat Mikrotia magna »
back to top