When squirrels conquered the sky 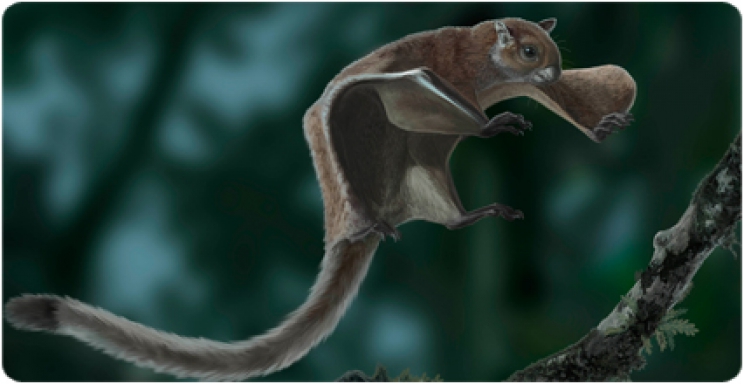 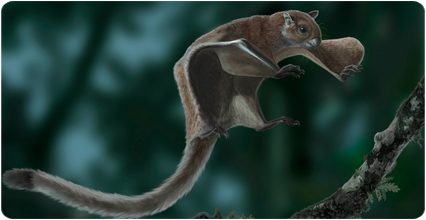 An international team of researchers led by Isaac Casanovas, from the Institut Català de Paleontologia Miquel Crusafont (ICP), describes in eLife journal the first fossil skeleton of a flying squirrel. It belongs to the species Miopetaurista neogrivensis, it is 11.6 million years old and is the oldest-known flying squirrel. The fossil remains were found at Can Mata Landfill (els Hostalets de Pierola, Catalonia, Spain), one of the most important Miocene sites in the world that in recent years has provided several exceptional fossils of primates, elephants and giant tortoises, among other faunal groups.

The more than 80 bones of the skeleton (including the skull and several elements of the anterior and posterior extremities) recovered from the site confirm that Miopetaurista neogrivensis was a gliding species. Flying squirrels have a unique and unmistakable wrist bone morphology, which is modified to hold and extend the patagium (the name given to the skin membrane they use to fly). Although in common language these animals are known as “flying squirrels”, in fact they glide using this membrane. By means of these adaptations they can glide up to 150 meters from one tree to another.

Miopetaurista is a very large-sized flying squirrel; researchers estimate that it should weigh between 1.1 and 1.6 kilos, similar to most species of current giant squirrels. "We have to imagine an almost one-meter-long animal (including the long tail) with a wingspan around 40 centimeters," explains Isaac Casanovas, researcher at the Institut Català de Paleontologia Miquel Crusafont (ICP) and first author of the article. Due to the large size of its bones researchers initially thought that the remains belonged to a primate.

A three-dimensional model of the skeleton was built from the recovered fossils. "Using computerized tomographies (CT scans) of the skull and several photographs we modeled the different bones to create a complete 3D model," say Josep Fortuny (ICP) and Óscar Sanisidro (University of Kansas), co-authors of the article. "To fill in the gaps of the missing elements, we used the anatomy of the current giant flying squirrel as a reference," researchers say. High-quality 3D models of the described material are available to the scientific community (or any interested person) for downloading and even could be 3D printed so researchers can have their own copies of the specimen.

The phylogenetic analysis performed in this study combined morphological data of extinct and living species as well as DNA sequences of extant species. "Results show that this fossil squirrel is closely related to the giant flying squirrel Petaurista, widely distributed throughout South Asia," explains Joan Garcia-Porta, researcher at the Centre de Recerca Ecològica i Aplicacions Forestals (CREAF, UAB) and coordinator of the phylogenetic analysis. "In fact, the skeleton of the living giant flying squirrel is similar to that of Miopetaurista to such an extent that their femur or humerus are practically indistinguishable," Casanovas argues.

It is already known that flying squirrels evolved from arboreal forms such as the red squirrel, but there is no agreement on when this separation took place. "Previous molecular studies dated their split at 23 million years ago, but some 36-million-year-old remains that could belong to flying squirrels have been found," Casanovas says. "The problem is that these ancient remains are mainly teeth and it is difficult to attribute them undoubtedly to a flying squirrel", he adds. In this new article published in eLife, researchers estimate that the split took place around 31 and 25 million years ago, earlier than previously thought. Therefore, the oldest fossils that were found would not belong to flying squirrel species.

Among mammals only bats show true active flight, but several groups that are not closely related to each other have developed gliding membranes, including flying lemurs or some marsupials, such as the sugar gliders. However, flying squirrels are by far the most successful group that adopted this way of going airborne, as there are up to 52 different species and their members are widely distributed throughout Eurasia and North America. Nevertheless, the origins of their evolutionary history are still unclear.

An exceptional site in a rubbish dump

The Landfill of Can Mata holds a set of more than 200 sites. It is unique in the world; a window to Catalonia 12 million years ago. In the last 20 years, interventions carried out by the ICP in Can Mata have led to the identification of more than 80 species of mammals, besides birds, amphibians and several reptile species. It is remarkable the abundance of primate remains that led to the description of three new species of hominoids: 'Pau' (Pierolapithecus catalaunicus), 'Laia' (Pliobates cataloniae) and 'Lluc' (Anoiapithecus brevirostris). During the construction of the landfill, hundreds of giant turtles of the genus Titanochelon were also recovered.

The study of the mammals of the Can Mata Landfill indicates the existence of a dense forest environment and a humid subtropical climate during the Miocene. The occurrence of beavers and chevrotains evidence the occasional presence of permanent water masses in some areas. Primates, dormice and flying squirrels are also indicators of dense forests. In fact, large-sized flying squirrel species such as extant Petaurista live mainly in tropical and subtropical forests of Southeast Asia.

More in this category: « The role of toes in the emergence of bipedalism Most complete study on Europe's greatest hadrosaur site published »
back to top