The forearm of the hominids: an accurate and efficient design 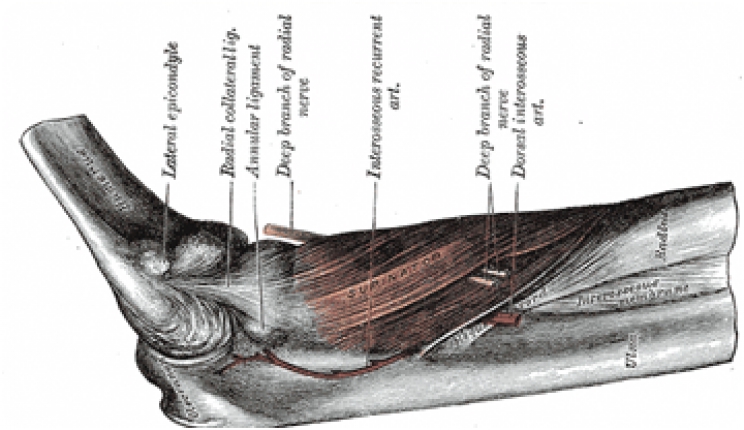 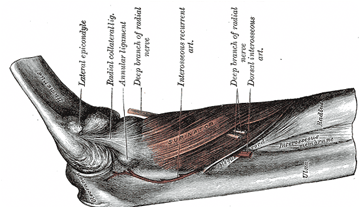 Drawing of a human elbow and forearm. . http://en.wikipedia.org/wiki/File:Gray420.png

The online edition of The Anatomical Record has recently published results of a research identifying design features that distinguish, from the observation of a fragment of a humerus,  if this bone belongs to a human or to a great ape. This work is part of an investigation into the design and efficiency of the forearm of hominids, led by the group of Biological Anthropology at UAB and with the collaboration of the ICP researcher  Xavier Jordana.

The forearm of the hominoids, current and fossil orthograde primates, is characterized by its rotational movement along its longitudinal axis, called pronosupination. The existing hominoids include gorillas, chimpanzees, orangutans, gibbons and humans. The paper "3D Analysis of the Forearm Rotational Variation in Human Efficiency" shows for the first time that it is thanks to the epicondyle that we can distinguish between humans and the great apes. Epicondyle is a bony prominence located at the lower end of the humerus (see figure below). Researchers who signe the article published this week in The Anatomical Record show that great apes have a larger epicondyle and it is oriented more proximally -closer to the shoulder- than in the case of Homo sapiens.

The epicondyle is located at the lower end of the humerus: the bony prominence ending at B point in the image. Pere Ibáñez-Gimeno. UAB

Research to learn about details of this movement is long-standing, and it is based on the hypothesis that the evolution of this group of primates optimized a design more efficient in those movements common to each species. In fact, the study delves into the details of the human humerus, radius and ulna shapes and sizes, as well as into the relative position of muscle attachments, and compares them with those of gorillas, chimpanzees and orangutans. The lower end of the humerus and the curvature of the radius are two of the morphological characteristics that have proven most important for understanding pronosupination. It was already known, for example, that the epicondyle of quadruped primates or pronograds is oriented more dorsally than in the case of orthograds, characterized by a straight trunk.

In this study the efficiency of pronosupination movements in humans is also studied , depending on the angle of rotation and if the arm is extended or flexed, and compared with that of apes. The results are interesting for two reasons. First, because the study of this efficiency pattern allows to distinguish between humans and apes. Second, because the characteristics of this pattern are consistent with the hypothesis of a morphofunctional evolutionary adaptation that follows criteria of efficiency. 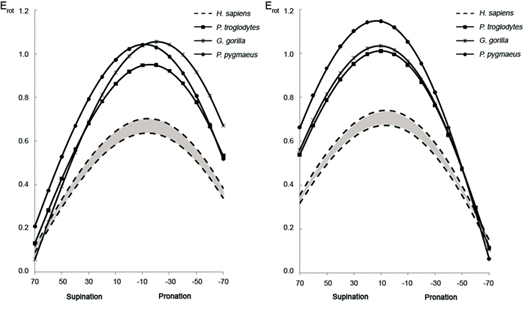 Efficiency curves of the pronosupination movement as a function of the rotation angle. The curve of Homo Sapiens is the lower one, which is distinguishable from the other hominids. The left figure shows the efficiency with extended arm and the one on the right with flexed arm. Pere Ibáñez-Gimeno. UAB

In the figure above, it can be seen that the pronosupination movement is less energy efficient in humans than in great apes. This result is somehow expected, since pronosupination is linked to the way great apes move : climbing trees in the case of orangutans, or walking on the knuckles in gorillas and chimpanzees. Movement is an activity with a very high energy cost, and we expect that evolution selects a more efficient design. In contrast, in humans this movement is much more related to the handling, which has a much lower energy cost.

Moreover, the curves have their maximum efficiency in different rotational angles. For humans this angle coincides with the neutral position when we have extended arms, and changes with flexed arms. In contrast, in orangutans, chimpanzees and gorillas this maximum is reached at locomotive common positions.

After this results, the next phase of research has started and it will incorporate other apes and fossil species. From the perspective of paleontology, this opens a new channel to identify a very specific morphological feature, but easy to measure thanks to 3D technology, in fossils that allows us to identify evolutionary adaptations to different types of hominid locomotion as well as coaptations to manipulation skills.

This work comes on top of the the study of the hominoids hand (link), led by the Research Group of Paleoprimatology and Human Paleontology of the ICP. Beyond hominid evolution, these studies foster progress in areas such as robotics or disability treatment and prevention as well as sports medicine.

More in this category: « A new and tiny lizard from the Cretaceous paleontological site of Las Hoyas in Cuenca With this thumb, fine motor skills come for free »
back to top